The Volkswagen Touran is a well-established MPV hero. Over the years it's scooped up an impressive number of What Car? MPV of the Year awards, and there are plenty of reasons why.

Where the Touran really shines is in how it doesn’t feel that different to drive from the Volkswagen Golf on which it’s based. Inside, too, you’ll find the same level of plushness as you do in the Golf, but with far greater practicality.

So, don’t think of this as some sort of van with windows; it’s more like a spacious hatchback, with handy sixth and seventh seats that pop out of the boot floor when required.

If that wasn’t enough, it’s also more compact than full-sized MPVs such as the Ford Galaxy – something you’ll appreciate that when squeezing into tight parking spaces on the school run. But is the Touran a better choice than similarly priced rivals, such as the Citroën Grand C4 Spacetourer and Ford S-Max? Read on over the next few pages to find out, and we'll also tell you which engines and trim levels make the most sense.

And if you decide to buy a Volkswagen Touran, don't forget to visit our New Car Buying section because there are some tempting discounts available. 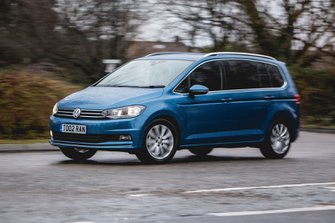 If you want lots of space for not a lot of money, then the Tur...

The B Class is plush, comfortable, relatively refine...