Have you noticed how some manufacturers are naming their individual models with the same first and last letters, in order to group them into a family? That’s why we’ve got the Skoda Karoq, which sits in between the smaller Kamiq and larger Kodiaq in the Czech brand’s SUV line up. The Karoq is, in essence, Skoda’s answer to the Nissan Qashqai, Peugeot 3008, Seat Ateca and Volkswagen Tiguan.

On the outside, it looks every inch the modern Skoda, but under its skin it shares an awful lot of its mechanicals with the Ateca and Tiguan – both of which are made by brands that are part of the same VW Group.

However, to make sure the Karoq doesn’t tread on any of its siblings’ toes, it’s slightly smaller than the Tiguan and is designed to be less sporty, but more comfortable and practical, than the Ateca, creating its own unique identity and place in the world.

It offers plenty of choice as well. There's a range of petrol and diesel engines, and you can choose between front- and four-wheel drive. When it comes to changing gear, you can do that yourself with a manual gearbox or have a seven-speed dual-clutch automatic do it for you. Oh, and there are plenty of trim levels to choose from, too.

So, is this the car for you? And if it is, which version should you buy? Click through to the next page and we'll tell you all you need to know. And remember: whichever new car you end up deciding to buy, don’t forget to check out our New Car Buying service to find out how much you could save on the brochure price of the Skoda Karoq and dozens of other cars.

The entry-level turbocharged 1.0 TSI 116 petrol engine is surprisingly sprightly and has decent low-rev shove, so it's fine if you spend most of your time in town. However, we prefer the 1.5 TSI 150 petrol, which is our pick of the range. It deals with heavier loads and faster, open roads more ably thanks to a very useful 148bhp. Acceleration is punchy (0-62mph takes around 9.0sec) throughout the rev range. As a result, you don’t have to work it as hard as the 1.0 TSI 116 to keep up with fast-moving traffic.

Stick to 17in or 18in alloy wheels and the Karoq comes up trumps when it comes to smoothing the harsh edges off ruts and bumps around town. Indeed, it upstages most rivals for ride comfort, most noticeably the sportier and firmer-riding Seat Ateca and the bouncier Peugeot 3008. Indeed, you’ll have to fork out for a Volvo XC40 to get a comfier family SUV.

The Karoq's ride gets even better on the motorway, making it a soothing companion on a long journeys. Edition and Sportline trims with 19in wheels are far from fractious, but you’ll feel more ruts and other road imperfections, especially at urban speeds.

All but entry-level petrol 1.0 TSI models have the option of something called Dynamic Chassis Control (DCC). This essentially allows you to stiffen and soften the suspension depending on whether you’re cruising or cornering hard, and makes the Karoq even more cushioned in Comfort mode. DCC works best with the 19in wheels by reducing the jitteriness they add around town, but the rest of the range rides so well it’s not worth the extra outlay. 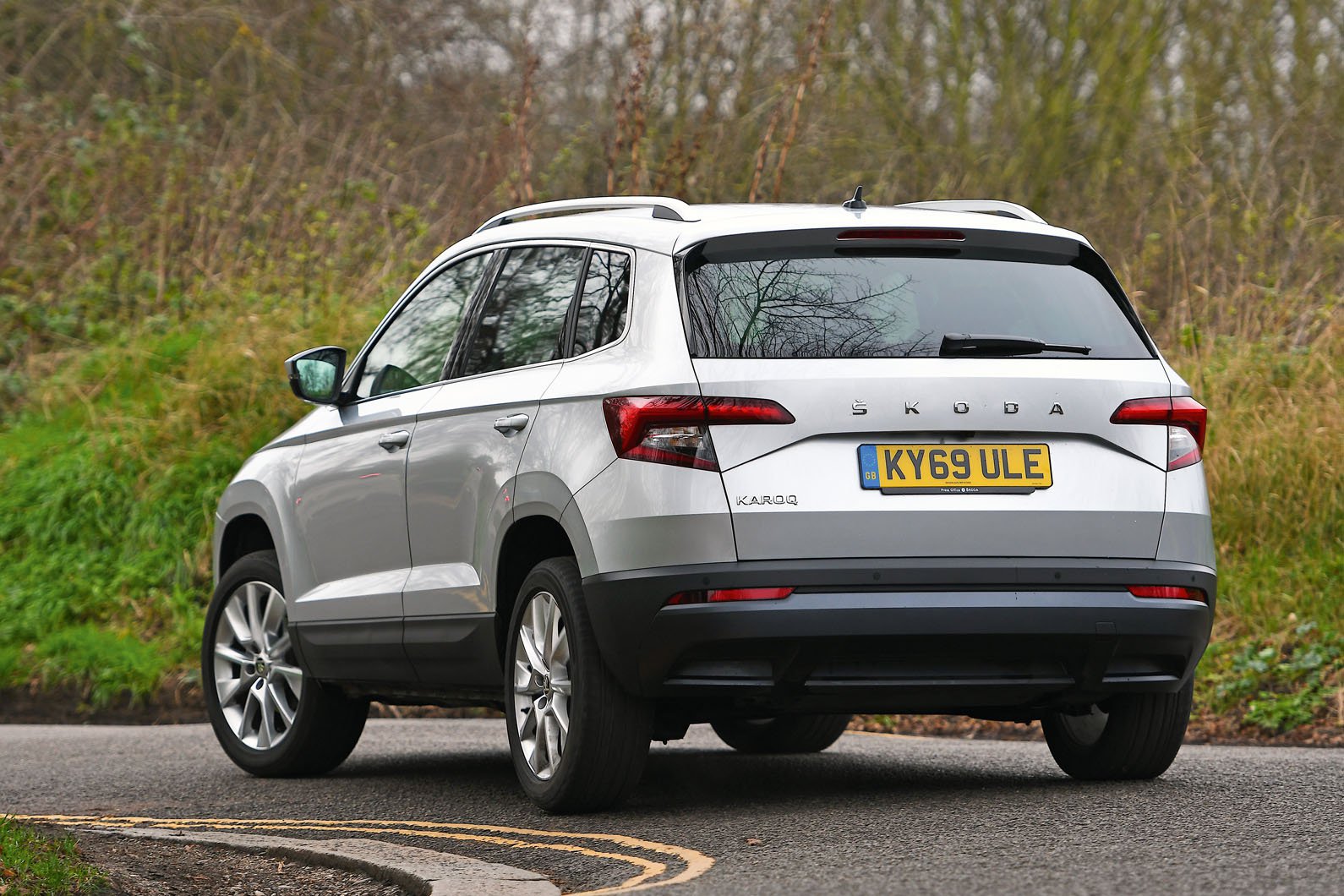 While the Karoq sits on the same basic platform as the Ateca and Volkswagen Tiguan, Skoda has clearly worked hard to give the Karoq its own character; it falls squarely in the middle of the spectrum between comfort and sportiness. It exhibits more body roll in corners than the more driver-focused Ateca, but it’s just as agile as the longer, heavier Tiguan.

Like its relatives, the Karoq’s steering has a natural weighting to it, which builds progressively as you turn into bend, while a fine level of accuracy lets you swoop from corner to corner with ease. And with plenty of grip at your disposal, you won’t lack any confidence as you do so.

Don’t forget that if you need your SUV to do more than just look the part, four-wheel drive is available. Mind you, while this might help you across a muddy field, don’t think of the Karoq as a cheap alternative to a Land Rover Defender – it definitely isn't.

Let’s start with the engines and gearboxes. The diesels are a little grumbly under hard acceleration, while the 1.0-litre petrol thrums away noticeably, albeit not unpleasantly, if you give it some stick. On balance, we’d say the 1.5 petrol engine offers the smoothest progress of all, although even this shouts quite loudly when you give it some stick. None of the Karoq's rivals are significantly better, though.

The manual gearbox is light and easy to use, as is the clutch. If you opt for one of the automatic models, these change smoothly between each gear but can be a bit jerky when pulling away from a standstill – a bit of nuisance when parking or in stop-start traffic.

Despite being very similar mechanically, the Karoq does generate more suspension noise than the Ateca; there's a background boom as it deals with bumps in the road, as well as a little more tyre and wind noise. Mind you, none of this is extreme enough to really nark you. For those with particularly sensitive ears, the Mazda CX-30 is a quieter companion.

Not the most sophisticated, but spacious, practical...

Well equipped, but falls short of class standards in many othe...