For those who prefer their sports cars served with a splash of fresh air, the Porsche 911 Cabriolet has long been a superb choice. Yet, while much of this success is down to the fact Porsche has never messed too much with the recipe, by the time every variant of this latest 911 is on sale, there will be some significant firsts for the car.

Perhaps the biggest news of all is that two plug-in hybrid models are planned. But don’t for a second worry that Porsche is having its New Coke moment.

The first versions it’s chosen to launch are the Carrera S and Carrera 4S. These have historically been the most popular, and each is still powered by a flat-six engine that’s slung behind the rear axle to help give huge traction out of corners.

In both cases, you get 30bhp more than previous versions, and acceleration that’s on a par with the 911 coupé; the rear-wheel drive S gets from 0-62mph in 3.7sec and the all-wheel drive 4S in 3.6sec. Meanwhile, the fabric roof takes just 12sec to fold up or down and can be operated at speeds of up to 30mph.

So, should you choose the 911 Cabriolet over rivals such as the Audi R8 Spyder, Jaguar’s F-Type and Mercedes-AMG GT Roadster? To help you decide, this review covers everything from what it’s like to drive to how practical it is and how much it will cost you to buy and run. Then, when you’ve decided what to buy, make sure you head over to our New Car Buying section to get the best deal. 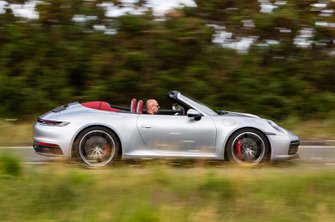 Some rivals are more agile, but the Mercedes-AMG GT is still a...