If you think electric cars are a new invention, then prepare yourself for a surprise: they actually date back to Victorian times. Yep, there were battery-powered horseless carriages whining around the streets of London and Paris well before the turn of the last century, and electric cars even dominated land speed records until 1902. However, there’s a good chance that the first modern electric car you’ll have actually heard of is the Nissan Leaf.

Launched in 2011, the Leaf made other battery-powered alternatives of the time seem like golf buggies because it looked, well, like a proper car. It drove like one, too, with nippy acceleration and a top speed that meant you could actually get where you were going faster than on a push bike.

The Leaf is now in its second generation and is a much better all-rounder than the original model. It’s faster, more sophisticated to drive, bigger inside and, perhaps most importantly of all, capable of much longer distances between charges. There’s also a range-topping version with a bigger battery that promises an even longer range and faster acceleration.

But how does the Leaf compare with its modern electric car rivals, such as the Kia e-Niro and Volkswagen e-Golf? And will it really fit into your lifestyle if you’re coming from a petrol or diesel car? We’ll tell you all you need to know over the next few pages, along with which trims and options make the most sense.

If you decide you want to buy a Leaf, check out our New Car Buying pages. You might find that you can save a hefty sum on the asking price. 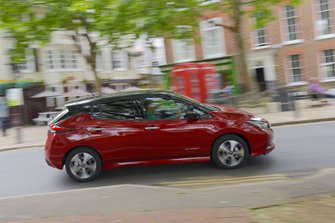 Best version of the 3 Crossback, but the Kia e-Niro and K...

Great value, decent to drive and has a long range be...

Electric motoring doesn't come much more desirable than the BM...

It’s hard to be definitive with so little confirmed informatio...