Applying coupé styling cues to other types of car is very trendy these days, as shown by the Audi A5 Sportback, Jaguar XE and new Mercedes-Benz CLA. But do these executives have the trousers to b... 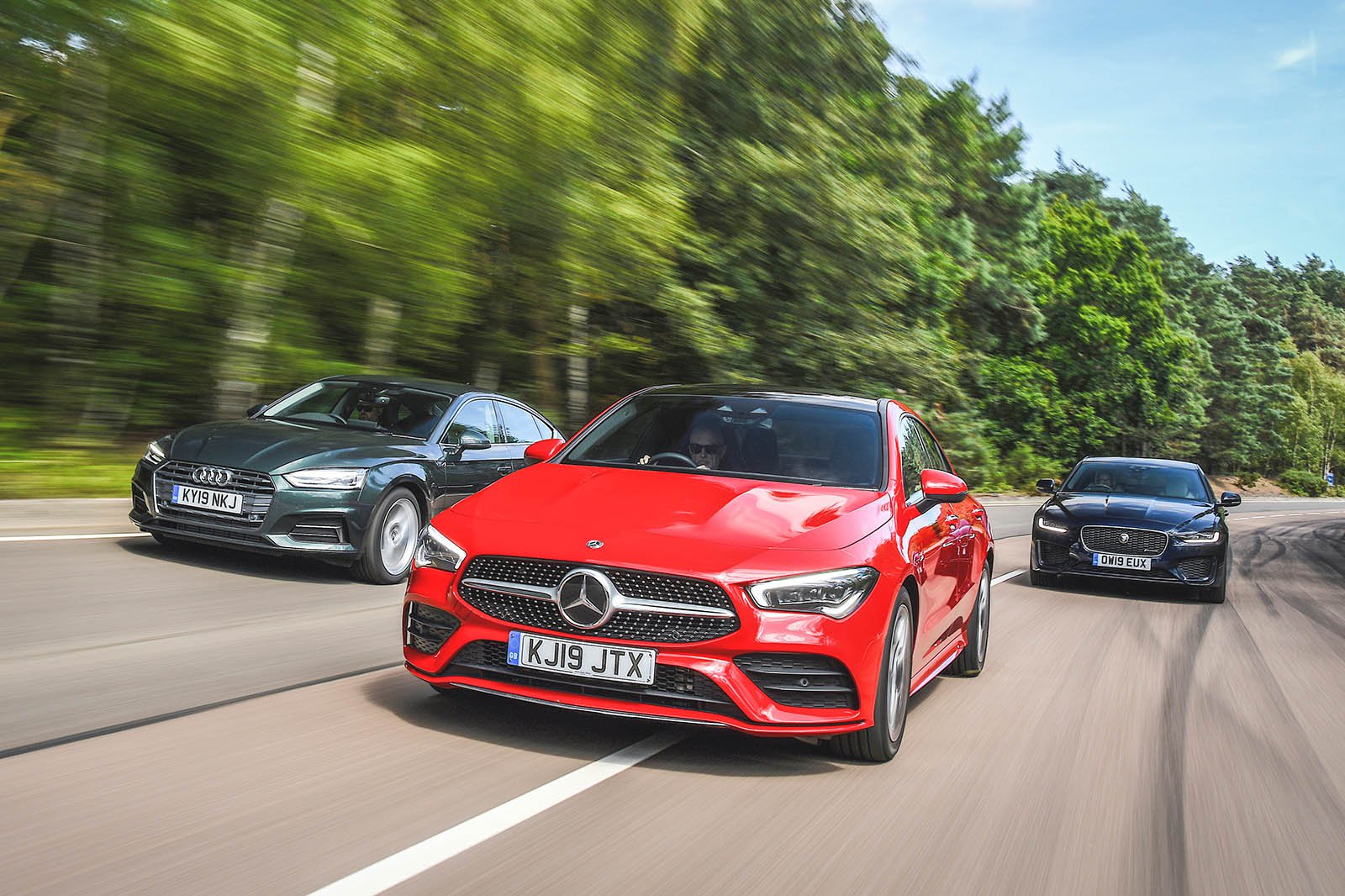 The more stylish interpretation of the A4 saloon should retain many of its sibling’s virtues.

Yes, it’s a saloon, but this recently refreshed XE is more about sportiness than practicality.

The previous CLA was a letdown, but this new model is based on the vastly better current A-Class.

Picture the scenario: you’ve been invited to a fancy ball and you’re deciding which shoes to wear. Do you go with the swanky handmade Church’s brogues or Jimmy Choo heels, or a pair of wellies? One would assume you’re not intending to splash about in puddles en route, so it’s the posh option, right?

Of course it is. Like choosing a car, if you need practicality then fine: buy a regular saloon or even an estate. But if you don’t have three kids or a cab firm to run and style is important to you, chances are you’ll look at cars like these.

Now, at this point you might be thinking: “But the Jaguar XE is a regular saloon, isn’t it?”. In one sense, yes, but unlike, say, the BMW 3 Series, it has traded some practicality for its sporty looks. And because it has just received an extensive interior and exterior refresh, we reckon it’s a good place to get the ball rolling.

Next we have the Audi A5 Sportback. Beneath its rakish roofline, it’s essentially an Audi A4, and since that was our overall Car of the Year in 2016, this five-door coupé should prove tough to beat.

Finally, there’s an all-new model: the Mercedes-Benz CLA. The original CLA was pretty ordinary, to be frank, but given that this second-generation car is based on the considerably improved latest A-Class, we have high hopes.

They’re a slightly eclectic bunch, then, but since each comes with a turbocharged petrol engine and an automatic gearbox and can be yours for around £35,000, all three deserve a place on your shortlist. 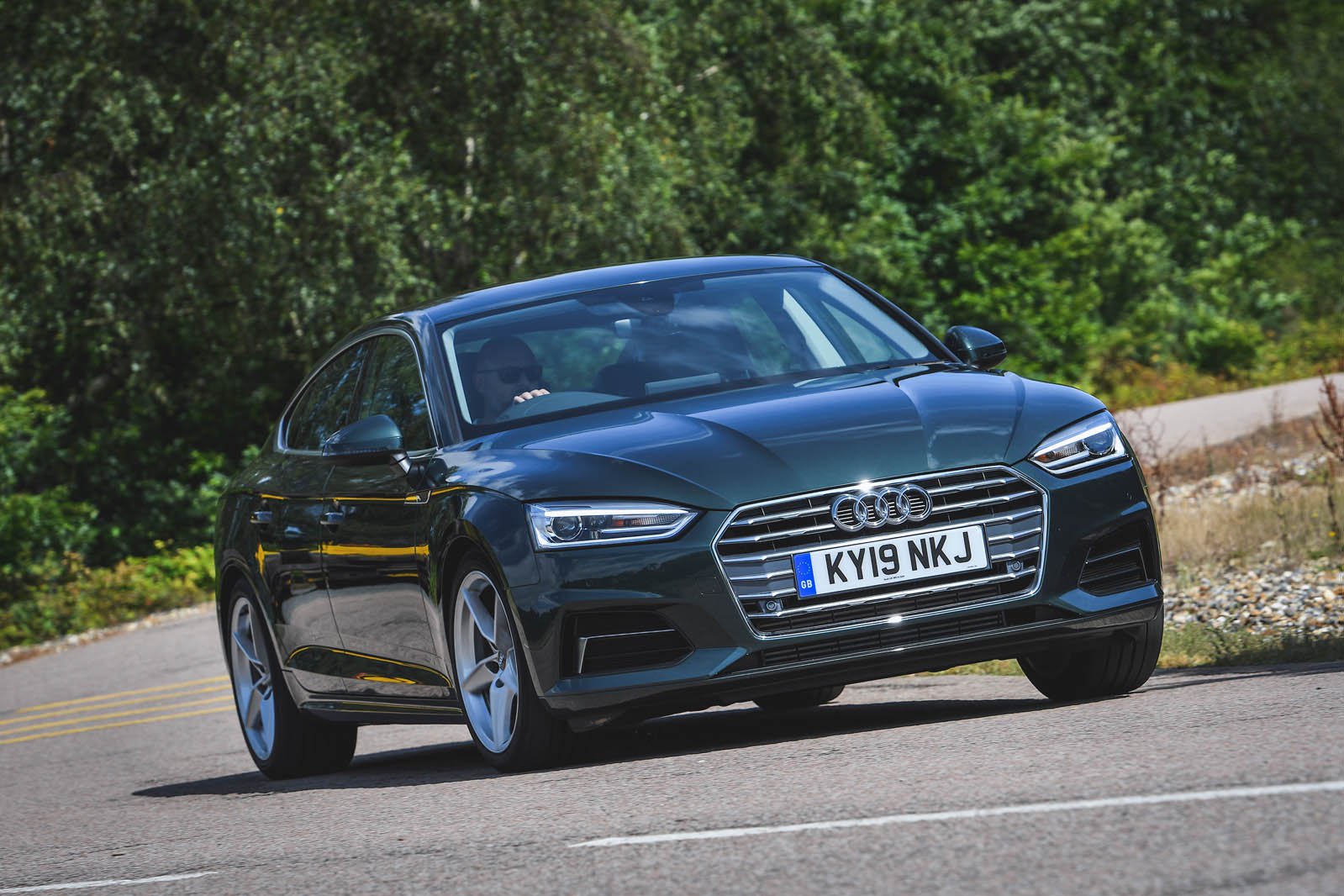 If you’re after something really quite nippy, pick the CLA. Although it isn’t as powerful as the XE, it’s much lighter, so it blitzed its rival’s 0-60mph time by half a second in our tests. That’s still some way behind Mercedes’ claim, but because our test day was rainy and the CLA has front-wheel drive, getting it off the line without wheelspin proved almost as troublesome as alchemy. Despite being neutered by Mother Nature here, though, it’s undoubtedly the most potent in all scenarios, including overtaking.

The XE’s engine is strong, and being the only rear-wheel-drive car here gave it a huge traction advantage off the line in the wet. Nevertheless, it was way off the acceleration times published by Jaguar, and part of the problem lies with its eight-speed automatic gearbox. It’s much slower to respond than the CLA’s ever-alert seven-speeder, and that’s a particular problem when you ask for a surge of power. It dilly-dallies to the point of distraction before eventually shifting down and firing you forwards with, it must be said, some gusto.

The A5’s seven-speed gearbox is better than the XE’s but still tardier than the CLA’s. So, the main reason the Audi is the slowest car in this test is a simple one: it lacks the power and shove of its rivals. Still, it’ll get you whizzing along the outside lane of the motorway without much stress.

The tuning of the gearboxes affects other things, such as how easy the cars are to drive smoothly. The slickness of their brakes and accelerators is another factor, and the CLA passes muster on all three fronts. As a result, it’s the easiest to drive like a skilful chauffeur.

The A5’s reluctance to kick down a gear fools you into pressing its accelerator ever harder, until eventually you get an excessive burst of revs. Combine this with the initially grabby brake pedal and it’s a little more staccato.

Nothing like as bad as the XE, though. Its brake pedal has no resistance at the top of its travel, so it’s incredibly hard to meter with any delicacy, and the accelerator is far too spiky, making it tricky to get going smoothly at times. Add in the recalcitrant gearbox and the most abrupt engine stop-start system and it’s a bit of a letdown. 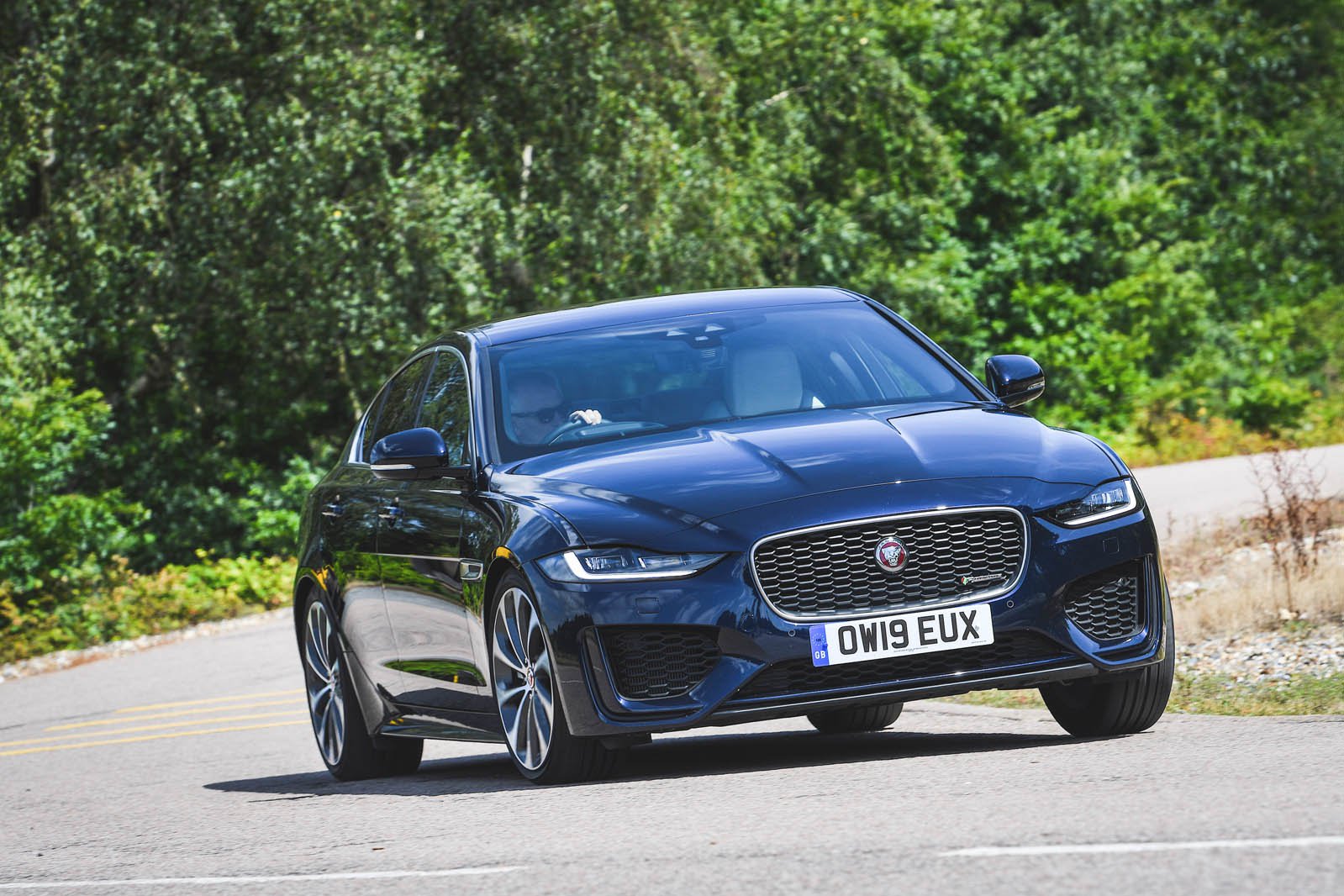 At least the XE’s engine makes up a little of the lost ground by being quieter than the CLA’s, athough the Mercedes motor isn’t unruly, instead fizzing away sportily. The quietest and smoothest propulsion, however, comes from the A5’s silky unit.

Once you’re up to motorway speeds, each engine melts into the background and the cars munch the miles with relative calm. The XE suffers the most blustering around its door mirrors and windscreen, while the CLA’s tyres make the grainiest drone. The A5 is the best in both these respects, but you can hear its suspension working away over bumps. The same is true of the CLA, whereas the XE is extremely well resolved in terms of this type of noise.

We generally recommend the XE’s standard suspension, because some will find the R-Dynamic setup (especially on 19in wheels) we have here quite firm. You can add adaptive dampers (£1020), which help, but as tested it fidgets the most on motorways and follows the topography of the road more intently than its rivals. The payback is that the XE feels well tied down, so you’re not bounced out of your seat over asphalt moguls. It never crashes crudely over potholes, either.

The A5 does twang occasionally over sharper-edged stuff, but otherwise it’s undoubtedly the most supple car here, easing you over everything from pimples to speed bumps very effectively. Our test car rode on standard Comfort Dynamic suspension, the softer of the two available. You can have stiffer Sport suspension for £325 extra, but if you value comfort, we wouldn’t recommend it.

The CLA is betwixt and between. It’s comfortable in the main, no question, but it’s less forgiving than the A5 around town (there are some sharper ridges that even the XE copes with better) and bounces quite a lot over the sort of dips and crests you encounter regularly on country roads. It’s suitably smooth on the motorway, though. 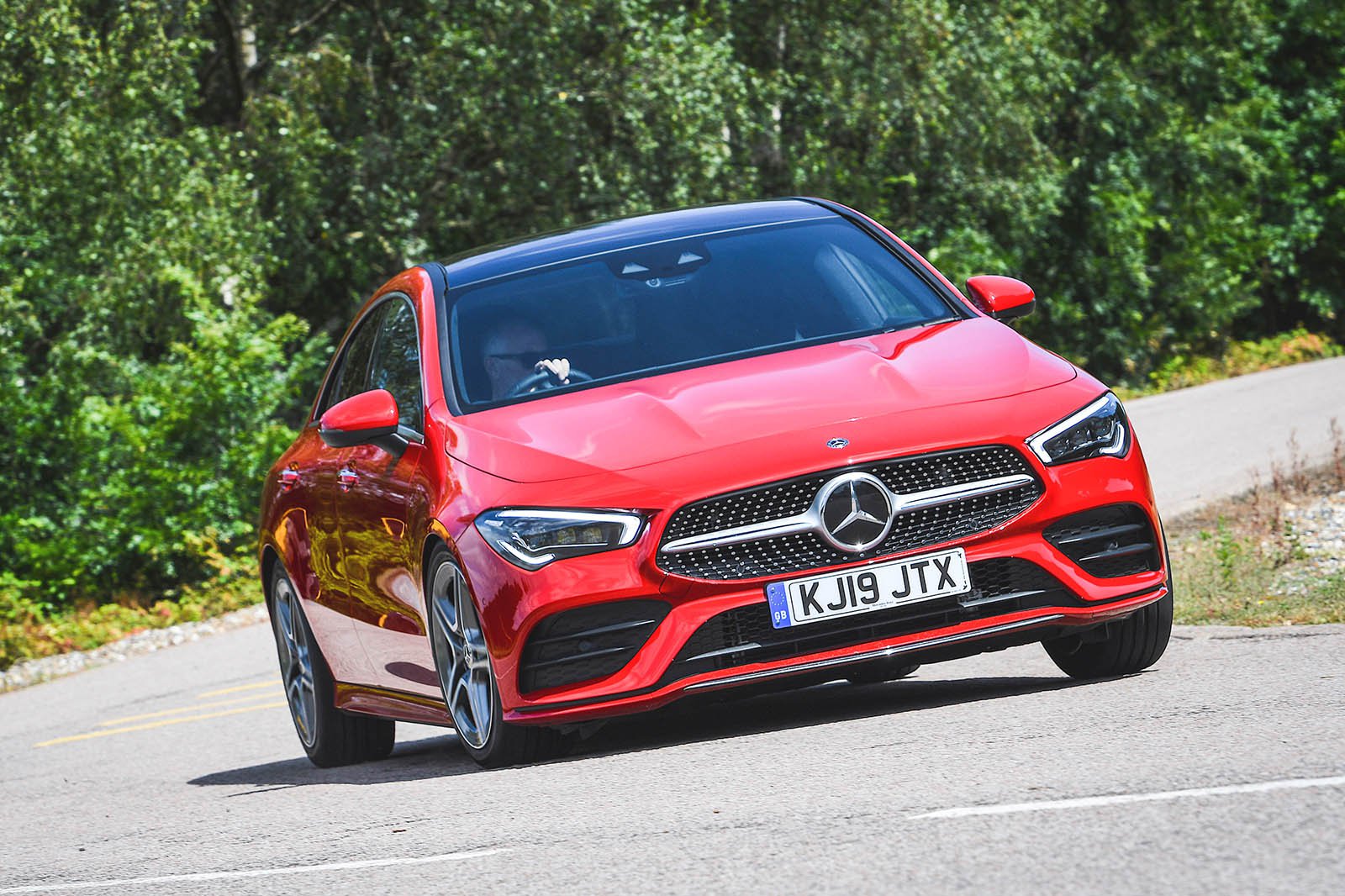 What about cornering? That’s potentially high up your list of priorities, considering these cars are meant to be sportier than regular saloons. Well, the XE is by far the most rewarding and engaging – not just because its rear-wheel-drive setup is the most playful but also because it steers so sweetly. Keen drivers will revel in the way the weight builds gradually and intuitively from the moment you begin to turn the wheel. Why is that good, you might ask? Because it keeps you keyed into the front wheels, making placing the car a work of instinct rather than conscious thought. The stiffer R-Dynamic suspension minimises roll and instability in high-speed turns, although the standard springs are pretty effective at this, too.

The A5 feels the most cumbersome in terms of bulk, but it’s tidy and confidence-inspiring enough that you can jump in and go quickly from the get-go. Despite leaning more than the XE, it feels balanced through turns and finds plenty of grip – especially at the front, helping it tuck in to bends with zeal. Its steering is the main issue, lacking the delicacy of the XE’s and feeling gloopy and viscous as you wind the lock on or off. The A5’s front-wheel-drive layout corrupts the steering under power, too, tugging the wheel left and right in your hands.

Around town, the CLA feels the smallest and easiest to slot through gaps and, thanks to the lightest steering, takes the least effort to direct. If you break out in search of countryside and back roads, it’s perfectly capable at up to eight-tenths pace. Try to go any harder, though, and the steering provides the least connection of all three cars and the front end wants to run wide through corners the soonest. So, the CLA is the least composed if you’re trying to keep up along a twisty route that has a few challenging cambers and contours lying in wait.