So impressed were we with current Audi A4 that we voted it our overall Car of the Year when it was launched in 2016. That was almost four years ago, though, and Audi knows how important it is to never rest on its laurels.

To stay in touch with the Mercedes C-Class and the BMW 3-Series in arguably the longest-standing three-car rivalry since we moved away from horseback, the A4 received a heavy visual update in 2019. But was it enough to keep the competition at bay?

At the front, the latest A4's trademark 'singleframe' grille keeps it in line with other Audi models. You might also spot that LED headlamps are standard across the range and display a unique light signature.

Around the back, the latest A4's taillights closely resemble those of the more expensive Audi A6. The A4 doesn’t have the full-width brake lights of the A6, but every model gets a smattering of chrome exterior details that add to its upmarket looks. That theme continues inside, too, where the A4's all-touchscreen infotainment system hints at more expensive Audis, such as the flagship A8 limo.

Audi has kept the A4's engine petrol and diesel engine lineup fresh, too, but is this all enough to best the car's rivals in the executive car class? Read on over the next few pages for everything you need to know about the A4, including which trim level, engine and options you should pick. Don’t forget there’s also the V6-powered Audi S4 which might be worth a glance if an ordinary executive saloon sounds a bit slow.

And remember, if you want to buy an A4, then don't forget to check out our New Car Buying pages. You could save a small fortune without any awkward haggling.

There’s a wide range of engines to choose from for the Audi A4, petrol or diesel with power ranging from 134bhp to 241bhp, as well as the 342bhp S4 which you can read about here. We reckon the 2.0-litre diesels make the most sense, partly because the strong pulling power they provide from low engine revs fits well with the character of the A4.

The 161bhp 35 TDI diesel has decent low-end shove for driving around town, but can feel a little flat when overtaking on faster roads. You’ll pass slower traffic much more quickly with the 187bhp 40 TDI, which is our pick of the A4 engine line-up. A 30 TDI unit will join the range later, but with a tad less power than the 35 TDI, it’s likely to be even slower, even if it is more fuel efficient.

The A4’s petrol engine line-up kicks off with the 148bhp 35 TFSI, which disappoints by needing to be worked fairly hard when building speed in a hurry. There’s also the 187bhp 40 TFSI, which offers a considerable performance boost without pushing up running costs too much – it’s our pick if you don’t want to go diesel.

There’s also a 241bhp 45 TFSI that will join the range later, which comes with quattro four-wheel drive and an automatic gearbox – and as you might expect, it feels pretty rapid. Unsurprisingly, this most powerful petrol engine is only offered on higher trim levels, which makes it fairly expensive.

Quattro four-wheel drive is standard on the top-powered petrol and diesel models, as well as the A4 Avant and A4 Allroad. It proves its worth in slippery conditions by helping the engine put its power to the road.

Three suspension setups are available for the A4, depending which trim level you go for. Technik and Sport trims have our favourite Comfort Dynamic setup, which uses conventional springs and dampers. This setup will give you the smoothest-riding A4, especially if you stick with the default 17in or 18in alloy wheels. It puts comfort first, dealing effectively with all manner of lumps and bumps, yet controlling body movement extremely well over dips and crests. It pays to remember that larger wheels tend to make the ride harsher.

The pricier S line and Black Edition come with Sport suspension as standard. As a stiffer, lower setup, it further sharpens body control but that comes at the expense of comfort, introducing a little extra bumpiness at low speeds. In our opinion that penalty isn’t worth paying, so we’d take advantage of Audi's offer to spec the Comfort Dynamic suspension at no extra cost.

On those same trims you can also upgrade to electronically controlled Adaptive Sport suspension. It, too is lower and stiffer than Comfort Dynamic, but lets you select Comfort mode to soften things a little and enjoy a much smoother ride. If you must commit to big wheels for a racy look, it’s an option we’d recommend. 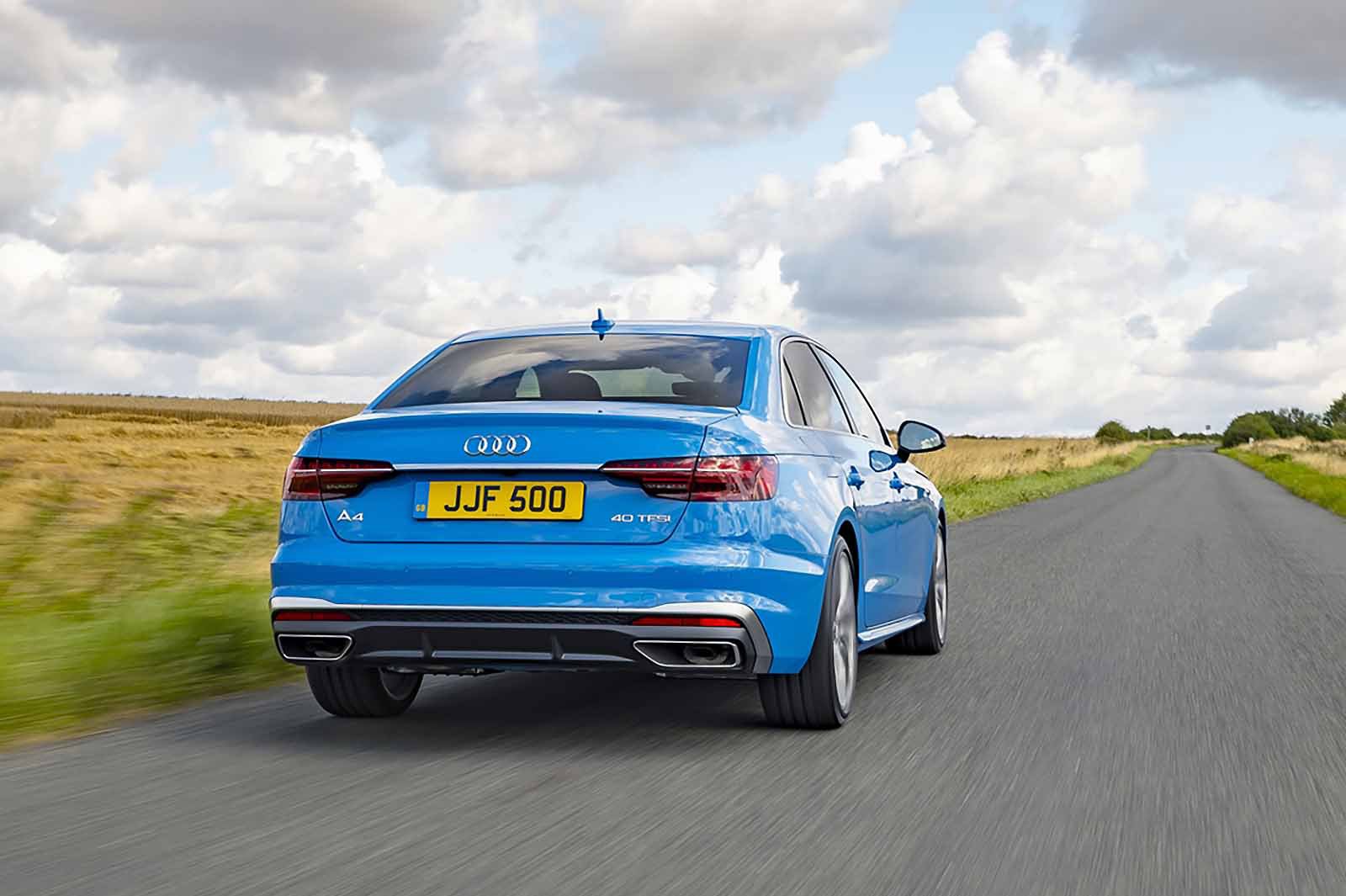 Above all, the Audi A4 handles predictably and securely, and grips the road exceptionally well. Versions equipped with the stiffer Sport suspension feel the most nimble, remaining pretty flat through corners and changing direction with reasonable eagerness.

However, despite a little added body lean, we’d stick with the softer Comfort Dynamic suspension that’s standard on SE and Sport; it provides a better balance between ride and handling. Front-wheel-drive versions can struggle for traction out of slow corners when the road is wet, but four-wheel-drive models, which are branded 'quattro', are pretty much unflappable.

The standard steering is precise and weights up consistently as you turn in to bends, but it doesn’t give you a huge amount of feedback through the wheel. The optional Dynamic Steering reduces how far you need to turn the wheel to get around tight corners at low speeds, or when parking. This is a pricey extra, though, and isn’t worth adding.

Fun handling isn't necessarily a priority for executive saloon buyers, but if you want something entertaining to drive you’d be better off with a BMW 3 Series or Jaguar XE. Both these rear-wheel-drive rivals are more involving on a spirited blast along a country road.

This is one of the Audi A4’s strongest suits: none of its engines, even the diesels, transmit much in the way of vibration through the body of the car. They can be a bit more vocal and boomy at motorway speeds than the petrols, but are no louder than their 3 Series or C-Class equivalents.

The A4 betters its rivals in suppressing wind noise, though, and you’ll only hear the occasional muted thud from the suspension over even the roughest patches of Tarmac. Road noise is also very well suppressed, although the bigger wheels have the potential to generate a lot more tyre roar.

The six-speed manual gearbox is precise, light and easy to use, or there’s also the option of a seven-speed automatic – badged S tronic. As with most modern Audi gearboxes, though, it suffers a considerable lag when you put your foot down, leaving a frustrating delay when building speed. This is most noticeable when leaping into a roundabout gap or changing lanes on the motorway.

The Honda Civic Saloon is good to drive, has a big boot and co...

Brilliant to drive and a fine all-rounder. A superb buy.