There are big cars, there are really big cars, and then there’s the Mercedes GLS. This 5.2-metre long, 2.0-metre wide behemoth is designed to seat seven people in comfort and is the flagship of Mercedes’ extensive SUV range.

As far as rivals are concerned, the GLS is closest in concept to the 5.1-metre long BMW X7. However, as a prospective buyer you might also want to consider (slightly) smaller seven-seaters such as the Audi Q7 and Volvo XC90, or if you only need five seats, the full-fat Range Rover.

Right now, there’s only one engine on offer in the GLS: a 3.0-litre six-cylinder diesel that brings a 400d badge. However, a mild hybrid model (the 450) will follow later, and its 3.0-litre petrol engine will be assisted by small bursts of electric power that should boost the car’s performance and efficiency.

Whichever of the three trim levels you choose, a nine-speed automatic gearbox, four-wheel drive and air suspension are standard. Plus, the interior is finished to the same kind of level as the S-Class limousine’s, and Mercedes offers semi-autonomous tech to make driving easier and help keep you safe.

In this review we’ll look at everything from what the Mercedes GLS is like to drive, to how practical it is compared with rivals, and how much it will cost you to run. Or, alternatively, to see how much we can save you on a new GLS, check out our latest deals. 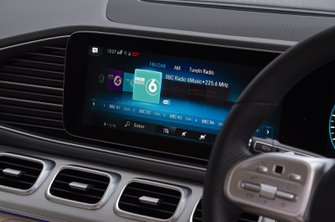