If you’ve flicked through a celebrity magazine or visited Harrods in central London lately, you’re probably familiar with the Mercedes-Benz G-Class. This square-sided SUV may be popular with the rich and famous, but it was initially developed as a military vehicle back in the 1970s.

The ‘G’ in its name stands for Geländewagen, or ‘cross-country vehicle’, and it’s certainly not a case of style over substance. Despite a number of updates to the engine, gearbox and interior, the G-Class’s looks and character haven’t really changed a great deal since then. This is very much an old-school SUV with rugged suspension, a separate chassis and a high centre of gravity – attributes that make it incredibly competent off road. The G-Class can certainly go a lot farther than Kensington High Street; think of it as a posh Land Rover Defender and you’re not a million miles away.

It’s certainly a lot pricier than your average 4x4, though, with basic models of the G-Wagen – as it’s affectionately tagged on the likes of Instagram – costing around the same as a mid-spec Range Rover or a heavily optioned Audi SQ7. But, despite its utilitarian persona, it exudes typical Mercedes luxury, with swathes of leather, a high-quality infotainment system and all the driving tech Mercedes can throw at it. And, if all that wasn’t enough, you can also have it with AMG tuning and a V8 engine in the Mercedes-AMG G63, which you can read about here.

If the idea of this most iconic of luxury 4x4s appeals, read on over the next few pages for our in-depth review. And, while we can’t promise huge savings on the G-Class, head to our New Car Buying pages to find great deals on a range of new cars and SUVs. 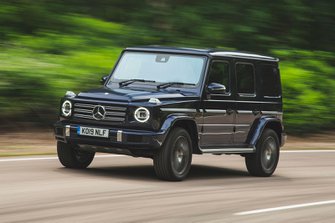