Sequels are rarely better than the original. And when a good idea is strung out for a third or fourth instalment, it's often lost in time. You could argue that was the case with previous versions of the Mercedes A Class, but this fourth-generation, and current model, is out to prove that it's back with a bang.

Which brings us right up to the present day with an A Class that aims to be better than ever and offer a version for everyone. No matter whether you're after a (relatively) affordable petrol, a super-frugal diesel, a fuel-efficient plug-in hybrid or a seriously rapid hot hatch (click here for our separate review of the fire-breathing A45 AMG), the A Class range offers it all. You can even buy a saloon version and a coupé (in the form of the CLA), but here we’re dealing just with the hatchbacks. Of course, there are plenty of other fine family hatchbacks to choose from, so how does the Mercedes A Class compete with those – particularly those wearing an equally posh badge?

Click through the next few pages and we'll tell you everything you could possibly want to know, including what the A Class is like to drive, what it's like inside, how safe it is and the engines and trims that make the most sense. We'll also run you through the options that we'd recommend you consider adding.

Then, if you decide you want to buy a Mercedes A Class, we can help you with that, too. Just click here to find out how much you could save on the brochure price without any awkward haggling.

We think most folks will be perfectly happy with the diesel-powered A180d. It earns our recommendation with a power delivery that’s progressive, rather than coming in one big surge like some of its rivals. And no, it's not spectacularly quick (0-62mph takes 10.5sec) but it still has pace on a par with an equivalent Audi A3 1.6 TDI. The A200d is also a cracker and feels quite a bit quicker, so that's worth considering, too, but the A220d stretches into the realm of the law of diminishing returns.

What about your petrol-engine options? We’d avoid the A180, because it needs to be worked quite hard to keep up with traffic. The more powerful A200 is better, but still no ball of fire, even when you do drive it with gusto. So, and we say this advisedly, if you really want a petrol and you can afford it, the A250 is the best non-AMG version to go for. It uses a 2.0-litre petrol engine that packs an impressive 221bhp – enough to take you from 0-62mph in just 6.2sec. That's a close match for a Volkswagen Golf GTI in a sprint and, thanks to having plenty of urge at low revs, it still feels pleasingly brisk when you’re not thrashing it.

If you’re looking for an eco-friendly plug-in hybrid, it’s worth having a look at the A250e. It uses the 1.3-litre petrol engine from the A200 combined with an electric motor to bump up the power output to a useful 215bhp. That makes it quite brisk (0-62mph takes 6.6sec) while providing you with an official electric-only range of around 40 miles. You can charge the A250e from 10% to 100% in an hour and a quarter using a 7kW wall charger.

Read our separate reviews for insights into the performance of the seriously quick AMG A35 hot hatch and the hugely more rapid AMG A45.

The differences in ride quality between an A Class and its premium rivals are fairly minor. Most versions of the Audi A3 are a little mores settled at high speeds but the A Class is generally more supple over patchy town roads. Meanwhile, the BMW 1 Series is a little firmer, especially in M Sport trim, but is better tied down over really wavy sections of road. Overall, the A Class is one of the comfier family car options, but if you really value a cosseting ride, then buy a Volkswagen Golf; it remains the most comfortable car in the class.

Of course, resisting the temptation to fit big wheels to your A Class is advisable if ride comfort is a priority. However, the relatively sporty A250 model is no less comfortable than the cheapest models in the range, because it features a more sophisticated rear suspension setup. Meanwhile, the fact that the A250e is heavier than all the other A Class models hasn't had an impact on its ride; if anything it's the most comfortable version.

Our separate reviews for the AMG A35 and even quicker AMG A45 will tell you how the two hot hatches perform when it comes to ride quality. 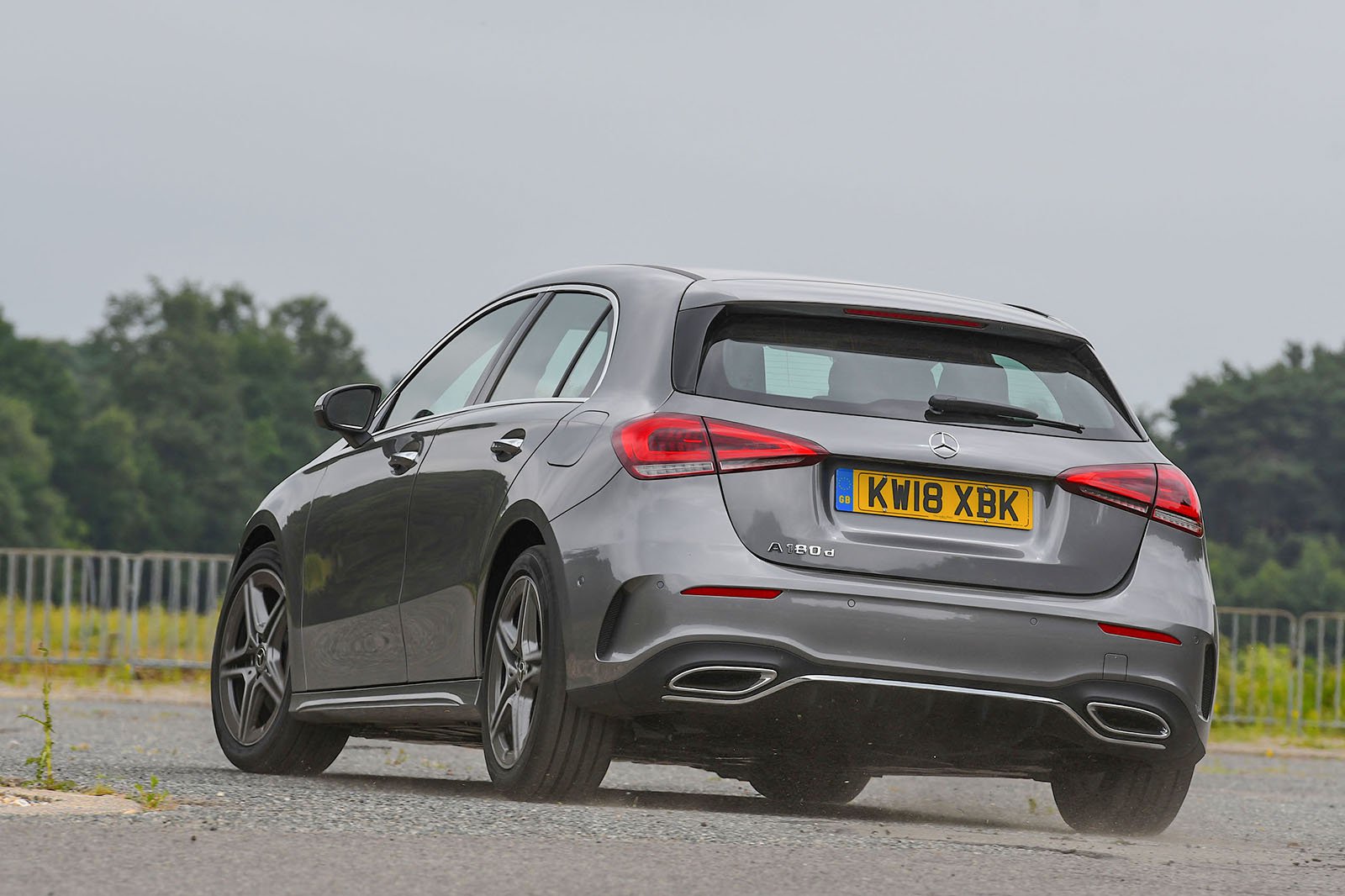 The A Class handles pretty well. Yes, there’s a bit of body lean through faster corners, but this happens so progressively that things never feel unstable during quick changes of direction. Even the steering impresses in the main; it builds weight in a natural way, which combined with accuracy means you can place the car just where you want on the road. It’s also light enough to ensure town driving isn't a chore. The A200 and A250 are the most dynamic versions, because their more sophisticated rear suspension design delivers flatter cornering.

Is it the best handling family car? No, because the A Class runs out of front-end grip quicker than an Audi A3 and isn't as agile as M Sport versions of the BMW 1 Series. The A250e is the least fun to drive; at around 200kg heavier than the rest of the range, thanks to its batteries, it exhibits the most lean in corners and runs out of grip soonest.

Handling is a big part of what the AMG A35 and even quicker AMG A45 hot hatches offer, and our separate reviews will tell you all you need to know.

Refinement isn’t the A Class’s strongest suit, but that's particularly the case if you choose the A180 or A200. Their 1.3-litre petrol engines are rather boomy and generally a bit uncouth, especially when you work them hard. Likewise, while the A250e is whisper-quiet in electric mode, the tranquillity evaporates when that same 1.3-litre petrol engine springs into life.

The more powerful A250 petrol comes across as rather more cultured, combining smoothness at low speeds with a fairly sporty rasp as you rev it out. The A180d is smooth and quiet by the standards of most rivals, while the A200d and A220d are only a little more raucous.

The six-speed manual gearbox that's standard on lesser versions of the A Class is a notchier than the A3’s, and versions with the eight-speed automatic 'box are quite jerky in traffic. The seven-speed auto gearbox of the A180 and A180d is much better.

There’s a noticeable amount of road noise at speed, but it's no more intrusive than in an equivalent Audi A3. Wind noise is worse, though; not because it's louder as such, but because it surrounds you – it's whipped up from around the rear windows as well as the door mirrors. The A Class is also worse for suspension noise than its key rivals.

A stylish and sophisticated hatch, the Mazda 3 featu...

The Infiniti Q30’s an interesting alternative, but it's ultima...