For many car makers, the reason for competing in motorsport is still best summed up by the phrase 'Win on Sunday, sell on Monday'. However, McLaren’s recent fortunes should probably make them question that assumption, because its sales have grown at a rapid rate despite the struggles of its F1 team.

More than any other model, it was the 650S that was key to that showroom success. But this has now been replaced by the McLaren 720S, which produces a whopping 720 metric horsepower (hence the name), or 710 of the Queen’s brake horsepower (bhp).

That's a phenomenal amount, especially given that it’s a lightweight mid-engined supercar with a carbonfibre chassis and mostly carbonfibre bodywork. Indeed, the whole thing weighs just 1419kg – not much more than a family hatchback.

Power comes from a 4.0-litre twin-turbocharged V8, which drives the rear wheels through a seven-speed automatic gearbox that can be manually controlled via steering wheel-mounted paddle shifters. And because of those turbos, it’s not just the power figure that’s startling; torque is, too, peaking at 568lb ft.

All of this translates into 0-60mph in just 2.8sec and a top speed of 212mph. But there’s more to a supercar than just statistics; the 720S’s biggest rival, the Ferrari 488 GTB, is engaging and fun to drive at any speed, not just when you’re thrashing it. So, how does the McLaren compare? 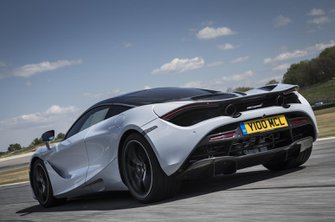 The Rolls-Royce Wraith might not be perfect, but it’s a hugely...