In a sea of strait-laced, one-style-fits-all cars, the swoopy lines of the used Mazda 3 do mark it out among its rivals. There’s even a four-door executive car version called the Fastback if the five-door doesn't appeal, but all models get a big, bold grille at the front to give it some genuine rear-view mirror presence.

What also differentiates the 3 from its rivals are the large-capacity engine sizes available and absence of turbocharging on the petrol engines. While the smaller-capacity engines fitted to rival cars have better (but often unrealistic) official fuel consumption, the 3 is capable of getting closer to its official figures and therefore returning similar economy to its competitors in real-world use.

Unfortunately, the Mazda 3 isn’t the most refined of family cars, with a noticeable amount of tyre noise coming into the cabin when on the move, accompanied by wind noise while cruising at motorway speeds. The diesels are also a bit louder than you'll find in the likes of the Peugeot 308.

The Mazda 3 doesn’t drive as well as rivals such as the Seat Leon, which is more composed in corners. Plus, the Leon’s steering has greater consistency to its weighting, meaning you'll be more confident driving it than the 3.

The interior has a pleasingly uncluttered layout and the controls you come into contact with regularly, such as the air conditioning dials and indicator stalks, all have a nice weight to them, suggesting this car has engineering integrity behind it.

It also has a very user-friendly infotainment system, complete with a 7.0in touchscreen on top of the dashboard and a rotary dial with shortcut buttons on the centre console between the front seats. You learn how to operate it very easily.

Any trim level with ‘Nav’ at the end means the car has sat-nav. As you'd expect, it's just as easy to use as the infotainment system, although it isn’t quite as good as the system you'll find in the Audi A3.

SE specification comes with air conditioning, alloy wheels, Bluetooth, iPod/USB media inputs and the standard 7.0in touchscreen infotainment system. SE Nav comes with everything SE cars have but adds sat-nav. SE-L comes with automatic lights and wipers and rear parking sensors, while top-tier Sport Nav has parking sensors on the front as well, along with larger, 18in wheels and a head-up display.

Interior space is good in the 3, with a decent amount of space up front and a rear bench that can take three, although they wouldn’t want to spend all day back there. The boot opening is narrower than it is in some rivals, so if you need to load a pushchair into the back, it might be a good idea to take it along with you to find out if it fits. The Fastback version has an even smaller boot entrance that hinders practicality, plus the sloping rear roofline impacts head room for taller rear passengers. 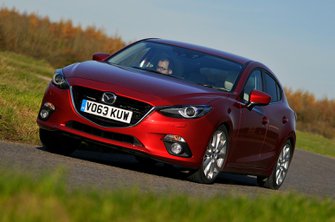