If the Lexus RX L was used as an inspiration for a remake of Alphaville’s ‘Big in Japan’, the title of the song would have to change to ‘Big in the USA’. While it doesn’t quite have the same ring to it, it’s true that the RX is something of a superstar across the pond. Since the first RX was introduced back in 1998, it has been Lexus’ most successful model to date.

Here in the UK, though, despite benefiting from industry-leading tech and offering buyers impressive build quality, each generation of RX has been held back by one fatal flaw: a lack of seven-seat versatility. In a market occupied by the BMW X5, Land Rover Discovery and Volvo XC90 – all of which offer larger families a third row of seats – this was an oversight that required correction.

Cue the RX L. From the outside, it looks more or less identical to the standard RX, but take a peek inside and you’ll find that Lexus has fitted a third row of two individual seats in the rear. Surprisingly, no extra space has been added between the front and rear wheels to lengthen the interior. Instead, Lexus’s engineers simply tweaked the standard car’s profile, allowing the RX L to keep the same styling as its five-seat sibling.

And the same goes for the mechanical elements. In the UK, there’s only one engine – a 3.5-litre V6 that’s augmented by a couple of electric motors fed by a battery pack in the rear. That means low claimed emissions for a squeaky clean conscience and lower company car tax bills. At a time when the reputation of diesel is at an all-time low, a petrol-hybrid SUV might be just the car for you.

Over the next few pages, we’ll let you know what the RX L is like to drive and be driven in, plus which trim makes the most sense. And, as always, visit our New Car Buying pages to see what tantalising discounts you can get on a new RX L – or any other car, for that matter. 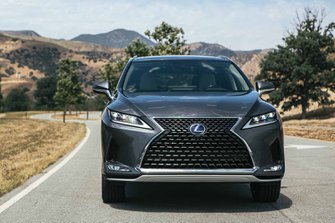