The modern Fiat 500 reinvents one of the most iconic cars of the late 1950s and 1960s, in much the same way that BMW did with the Mini. Cute styling, a vibrant personality and lots of kerb appeal have made it a surefire hit on the used car market.

It's been around since 2008 and, in time, Fiat expanded the range to include a convertible 500C version, and two larger and more family-friendly versions called the 500X and the 500L. You can even buy hot-rod versions made by the tuning arm Abarth, adding a fair dollop of speed into the equation.

From 2020 onwards, you could buy a mild-hybrid version, or, from later on that same year, an all-new, slightly larger and fully electric model. However, for real charm and character, it's still the more straightforward two-door city car most seek out.

Under its pert bonnet there was, for most of its life, a choice of a 1.2-litre and 1-4.litre four-cylinder petrol units and a two-cylinder 0.9-litre Twinair that's good on fuel officially but less so in reality. Alternatively, for the economy conscious, there was a 1.3-litre diesel, but that's a bit noisy and unrefined in urban driving.  A tweak in 2011 and a facelift in 2015 dispensed with both the 1.4 petrol and the 1.3 diesel units. Those sporty Abarth versions all come with the same 1.4-litre Tjet engine, but each produces a different output - 143bhp, 163bhp and 178bhp for the 595, Turismo and Competizione respectively.

The 2020 facelift brought in a 1.0-litre mild-hybrid engine. You can’t plug it in, and it can’t travel on electric power alone. Instead, the naturally aspirated 1.0-litre three-cylinder petrol engine has a tiny electric motor and a minuscule lithium-ion battery to help share the effort.

Basically, there are three trim levels to choose from: Pop, Popstar and Lounge. In later models, Sport replaced Popstar. The entry-level Pop models come with LED day-running-lights, Fiat's Uconnect infotainment system with USB connectivity, and height-adjustable steering wheel, while upgrading to the limelight and the Pop Star trim will see the additions of air conditioning and rear splitting seats. The range-topping Lounge models come with luxuries such as a fixed panel glass roof, rear parking sensors, fog lights, a DAB radio and Bluetooth all included as standard.

The Abarth models are a slightly different breed and, as you might expect, come with all the sporting pretensions expected from a hot-hatch-cum-track-day-special.

The Twinair engine is a bit of a mixed bag, providing character but needing to be revved and therefore becoming rather thirsty and noisy. The 1.2 is our favourite mix of punch and economy, while the diesel unit feels a little heavy in the pert 500. The later hybrid feels pretty much like the regular 1.2 on the road, with no noticeable gains in performance.

Urban streets are where the 500 excels, thanks to its reasonably nimble handling. On faster roads, its limitations become more apparent, because of its nervous and unsettled ride. Things were improved with the chassis revisions that were made in 2010, giving it a similar set-up to the Ford Ka, which used the same platform. The 500's refinement also suffers when the speed builds, with wind and road noise becoming increasingly irritating. At least the engines aren't too noisy, although none are exactly refined, even the hybrid version.

The retro interior is almost as good to look at as the exterior, with plenty of neat design touches. Material quality won't challenge that of the Mini, but it's far from the worst in this regard, and there are enough chrome finishes to lift the overall ambience.

Front, side, curtain and knee airbags come as standard with all models, as do Isofix points for mounting child seats. The 500 scored a five-star Euro NCAP safety rating when it first appeared in 2008, but this was reduced to three stars in 2017 when a more stringent testing regime was introduced.

The modern 500 is bigger than the original, but it's still very compact by today's standards. There's good passenger space in the front, but the back is cramped for adults. The boot isn't great, either; it's bigger than that of the Mini but nowhere near as good as the Volkswagen Up's. That car is also more practical in other ways, too, because it's also produced in five-door form. 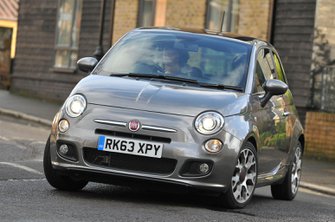