A much-given piece of parental ‘expertise’ is the old adage “buy cheap, buy twice”. In other words, cheap out on a purchase and you’ll regret it in the long run. That may be sage advice when it comes to choosing domestic appliances and holiday accommodation, but the Dacia Duster proves that thriftiness can sometimes have you feeling rather smug.

In the world of wheels, Dacia is the undisputed champion of giving motorists a lot of car for comparatively little money. Its Duster family SUV costs from around half as much as the Seat Ateca range starts at, and handsomely undercuts the Renault Kadjar. That latter point is particularly significant; Dacia is a sister company to Renault and shares much technology with the famous French marque, so this is no dodgy off-brand proposal.

The Duster range has enough models to suit a broad range of family needs. The cheapest are well adapted for the role of no-nonsense domestic workhorse, while the top trim levels have no shortage of mod cons, including sat-nav and a rear-view camera. Depending on which of the four petrol and diesel engines you opt for, two or four-wheel drive is available. With so much choice, and offering such great value, it’s no surprise that the Duster won the low-price-point family SUV gong in the 2019 What Car? Car of the Year awards.

Of course, other brands have now cottoned on to the Dacia formula, and the MG ZS matches the Duster for size and challenges it on price. Does that make a better buy, though, or should you set your sights on something a little pricier?

Read on to see how the Dacia Duster compares with its closest rivals. And, whatever new family SUV takes your fancy, head to our New Car Buying pages for a great, fuss-free deal.

We’ll look at the Duster’s trim levels later, but it’s worth mentioning here that our favourite engine, the turbocharged 1.3-litre petrol TCe 130, is available only on mid-range Comfort models and above. This is a shame, because its 128bhp gives it a pleasing briskness and noticeably more overtaking shove than the less expensive entry-level, 98bhp 1.0-litre TCe 100. It also gives you an extra gear for more relaxed motorway cruising.

Moving up to the more expensive 1.3-litre TCe 150 is only worth it if you really need to have the quickest Duster, or four-wheel drive, which we’ll tell you about later. If diesel power is more your thing, there’s a 113bhp 1.5-litre diesel (called Blue dCi 115), which is related to that used by the Mercedes A-Class. It’s snappy enough once you get the engine spinning above 2000rpm but doesn’t have a lot of shove at low revs, so you’ll find yourself changing down a gear more regularly than you might like. It’s only worth choosing if you expect to cover enough miles every year to benefit from its greater fuel economy.

All engines but the TCe 100 are connected to a six-speed manual gearbox; there’s no automatic option at all. There is, though, a four-wheel drive option for the diesel and most powerful TCe 150 petrol engines; it adds weight, blunts fuel economy and makes the Duster less willing to accelerate up to speed, but if your routine sees you taking on conditions more treacherous than a wet, gravelly track, you’ll be truly impressed with it. The Duster’s shape means it can’t quite attack such intimidating obstacles as the more compact, off-road-biased Suzuki Jimny can, but it’s still surprisingly capable on a challenging off-road course. Yes, you’ll wince a little as it rubs its chin or belly on the ground, but it has no trouble hauling itself up steep, rutted and sandy inclines, as long as you’re prepared to use plenty of power. A super-low first gear certainly helps with this.

The Duster borrows many of its oily bits from old Renaults that are no longer on sale, and that means its suspension is rather old-fashioned by the latest standards. Going for a four-wheel-drive Duster gets you more sophisticated rear suspension, which helps improve both stability and comfort both on and off road.

Both setups are okay around town, thanks to a combination of relatively small wheels and high-profile tyres that help to absorb most small lumps and bumps without jostling you around in your seat too much. However, at motorway speeds the Duster never feels truly settled, riding with a slight judder over all but freshly laid asphalt. It’s still not as bumpy as the MG ZS, though. 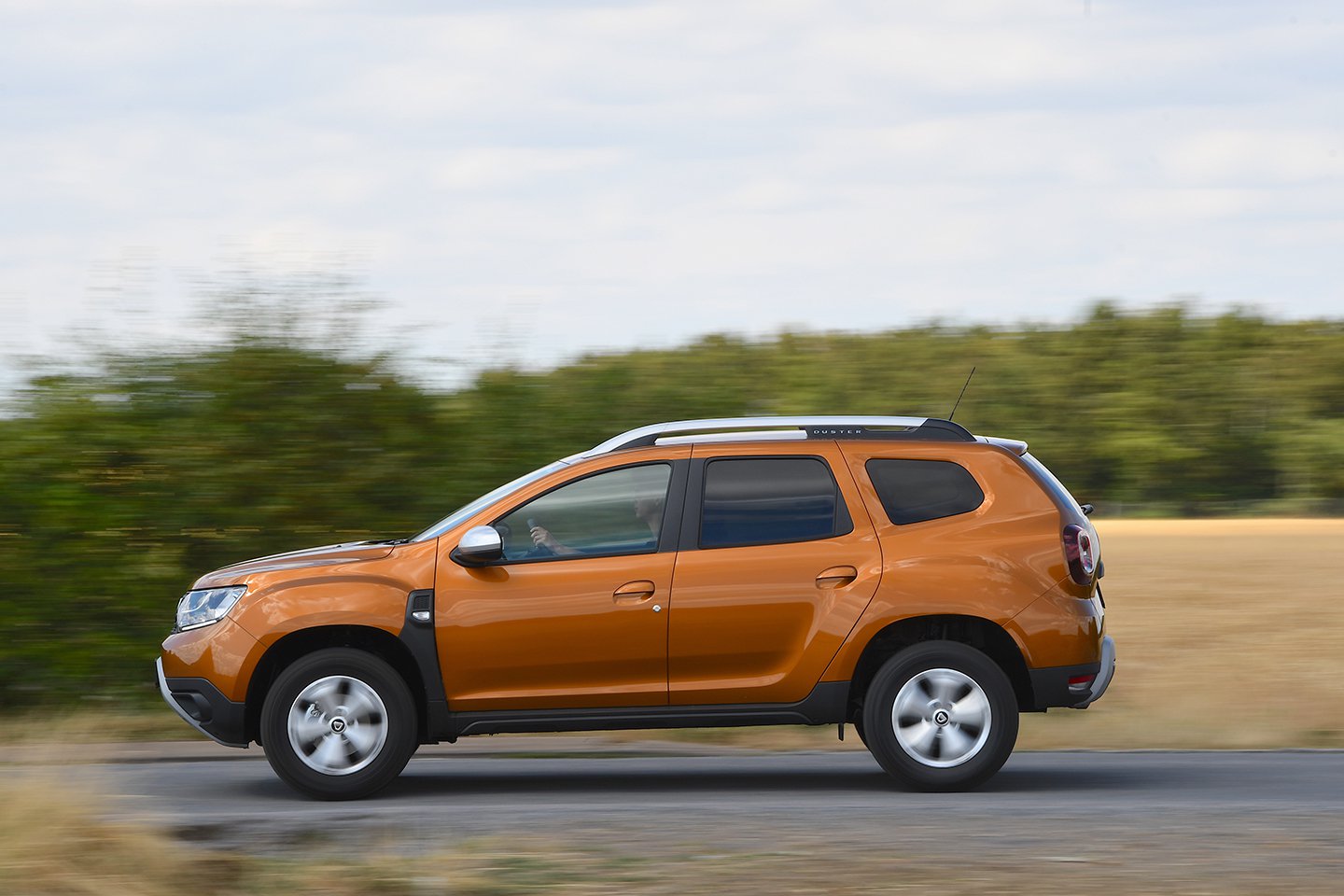 The Duster handles predictably enough, although its soft suspension means it leans quite a bit in corners and its tyres serve up less grip than those of the MG ZS. When driving on faster, more undulating roads, there's also quite a lot of body bounce, which can cause you and your passengers to do some unintentional headbanging. There’s also fairly pronounced nose dive under hard braking, but the Duster stops in a shorter distance than the MG.

The steering gives you a reasonable sense of connection with the front wheels, so you always have a fair idea of how much grip there is, even if the car is slow to respond to inputs. It’s certainly not a car that encourages you to drive in a sporty manner, though; the better steering response of the MG ZS makes it keener to dart into corners.

The four-wheel-drive versions provide a bit of extra traction in slippery conditions, but in day-to-day use there’s no particularly noticeable benefit.

The 1.3-litre petrol engines are surprisingly hushed, with just a faint whine under acceleration, while the diesel transmits noticeable vibrations through the steering wheel and floor area that surrounds the pedals.

There's a fair bit of wind noise from the door mirrors and roof rails on the motorway, but never to the extent that you’ll need to shout to communicate with those sitting in the rear. Back seat passengers will also feel a bit of vibration from the suspension – particularly in front-wheel-drive models.

A great all-rounder that matches the class leaders on most fro...

The Seat Ateca is one of the most rounded new cars on sale and...