“Do not try to do everything. Do one thing well.” So said the late boss of Apple, Steve Jobs — a man who proved multiple times that the key to a successful product is simplicity.

Now that might sound counterintuitive; surely something that caters to everyone's tastes would be more successful? But as BMW proved with its heavy, hard-top, second-generation Z4, it can be all too easy to ruin something by trying to appeal to everyone.

Mercifully, all the signs are that BMW has learned from its mistakes and re-focused its efforts on making the current Z4 a better driver's car. So, like the brilliant first-generation model, today's Z4 uses a cloth hood that brings about a lower centre of gravity. It's also wider than ever before, which along with redesigned suspension should bode well for stability through corners.

Not all the news is positive; being longer as well as wider, today's Z4 is fractionally heavier than the previous generations, but BMW reckons that all the other improvements will make up for those extra pounds. There’s also a top-spec version with M Sport tweaks that cover all bases; there’s M Sport suspension, an M Sport braking set-up and aggressive M Sport aerodynamic styling.

So, to see if the Z4 can finally take on sports cars such as the Audi TT Roadster at one end of the price spectrum and the dominant Porsche Boxster at the other, read on for our full review. We’ll tell you how it drives, how it feels on the inside, how practical it is and what it’ll be like to own.

And if you're tempted to sign up for a Z4 – or one of its rivals – head straight to our New Car Buying page to see how much of your hard-earned cash we can save you. 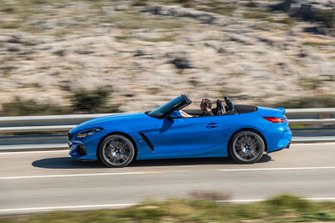 The Porsche Cayman is a joy to drive and beautifully built – i...