Big yet nimble, luxurious yet frugal, exclusive yet well priced. The BMW 8 Series is a super-luxury coupé that’s designed to offer several seemingly conflicting qualities and so is a suitably ambitious flagship for the Bavarian brand.

You can choose from powerful six-cylinder diesel or V8 petrol engines that are linked to an eight-speed automatic gearbox and send power to all four wheels on most versions. Plus, the 8 Series uses a mix of high-strength steel, aluminium, magnesium and carbonfibre-reinforced plastic in its construction to keep weight down and in turn improve both handling and fuel economy.

The promise of seating for four further adds to its appeal, as does the long list of high-tech features that you can have and the fact the range-topping version borrows its engine from BMW’s bonkers-fast M5 performance saloon.

But should you choose the 8 Series over hugely desirable rivals such as the Aston Martin DB11, Bentley Continental GT and Mercedes-Benz S-Class Coupé? And is it sporty enough to be a viable alternative to the Porsche 911?

Over the next few pages, we’ll look at everything from what it’s like to drive, to how practical it is and how much it will cost you. And before you buy any new car, don’t forget to check out what deals we can offer you via our our New Car Buying service. 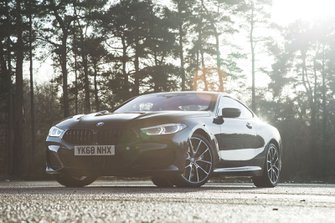 Exciting to drive and looks great, but not as polished as riva...

The Jaguar F-Type makes a great noise and the more expensive v...