It seems oxymoronic, doesn’t it? A coupe is something that traditionally has two doors, so adding two more seems to defy convention. But breaking the rules is not necessarily a reason to be poo-pooed, and four-door coupes, like the BMW 8 Series Gran Coupe, have been a big hit ever since the Mercedes CLS burst onto the scene back in 2004.

Besides, BMW itself has form in defying convention; with the BMW X6, it created the even more mind-distorting coupe SUV concept. It could be argued that four doors on a low-slung coupe is still an agreeable blend of elegance and practicality, while a chunky-looking SUV coupe isn't. So, you could say that the 8 Series Gran Coupe belongs to a rarified club: a car that lets you ‘have your cake and eat it'.

Where, then, does the 8 Series Gran Coupe fit in the market? Well, according to BMW, it’s deeper into the luxury sphere than the previous 6 Series Gran Coupe (click here for our used review). The more powerful versions align with the Porsche Panamera on price, but throughout this review we’ll also be referencing its cheaper rivals: the Mercedes CLS and Audi A7 Sportback.

In essence, the Gran Coupe is a two-door 8 Series that’s been stretched on a rack, and both bodystyles offer the same engines. There’s a 3.0-litre six-cylinder petrol engine with rear-wheel drive, or a V8 petrol and six-cylinder diesel that come with BMW’s xDrive four-wheel drive system.

Read on to see which of those engines we think is the best fit for the 8 Series Gran Coupe, and how it matches up to the competition. And when you’re done deciding, head to our New Car Buying page to find the best deals for the least hassle. 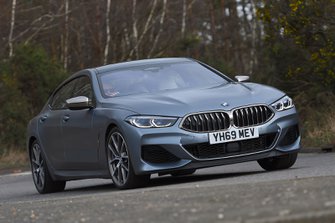