The Bentley Bentayga marked a whole new direction for the prestigious British brand as its first ever SUV. When it first arrived in 2016, it was a trailblazer for high-end luxury SUVs and was virtually unchallenged at its price point.

Since then, competition has hotted up with cars like the performance-focused Lamborghini Urus and ultra luxurious Rolls-Royce Cullinan following in the Bentayga's wake. But it doesn't just face rivalry from above, there's no shortage of luxury SUVs that cost far less than the Bentley, such as the Range Rover, Land Rover Discovery and Audi Q7.

As with the firm’s Flying Spur and Continental GT, the Bentayga makes full advantage of Bentley's position within the Volkswagen Group; beneath its imposing bodywork you'll find essentially the same platform as underpins Audi’s flagship SUV.

The Bentayga has a rather eye-watering lineup of engines to help it stand out from its Audi stablemate, though. Right now there is a whopping great big 6.0-litre W12 petrol engine, as well as a 4.0-litre V8 petrol, and there's a hybrid powerplant on the way. A V8 diesel was previously offered, but that option is no longer available in the UK.

Read on to see how the Bentayga stacks up as a luxury SUV, and whether it justifies its huge premium over the Q7. And if you are tempted by the big Bentley, don't forget to check out our deals. 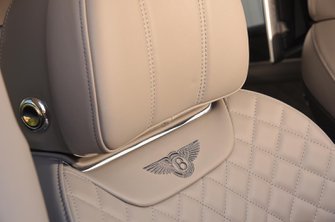 Rugged, reliable and with a high towing capacity, but the Mits...