We often get asked "What’s the best car in the world?". It’s a tricky question to answer because, well, it depends on quite a lot.

But the Audi Q7 makes a pretty compelling case for itself. This five-metre-long 4x4 has been the benchmark in the luxury SUV class ever since its launch in 2015, making some other very fine cars, including the BMW X5, Land Rover Discovery and Volvo XC90, look ordinary in the process.

Key to its appeal is its versatility, because it can seat seven people in lavish comfort, yet it has the driving manners of something much smaller and lighter. It’s a great tow car, too, and can even manage a bit of off-roading.

The Q7 was facelifted in late 2019 to freshen up its looks, and at the same time it received a new interior and an overhauled infotainment system (not all good news, as we’ll explain later). On top of that, all versions were given mild hybrid assistance, allowing the engine to switch itself off when decelerating in order to reduce fuel consumption.

Over the next few pages, we’ll not only explain why the Audi Q7 is such a fantastic all-rounder but will also talk you through its few weaknesses. Plus, we’ll tell you which engines and trims make the most sense and which option packs to consider.

If you decide you want to buy an Audi Q7, head over to our New Car Buying section to find out how much you could save on the brochure price, without any awkward haggling. 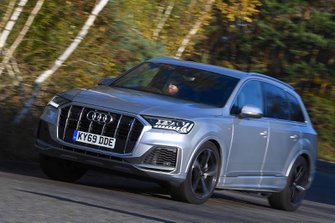