Having been the last of the big three premium German brands to join the SUV party, Audi has strengthened its line-up from the top down over the years. The Audi Q5 is its second-biggest offering (putting the coupé-styled Q8 aside) and distils much of the appeal of its larger, costlier stablemates into a more compact and economical package.

Clearly cut from the same cloth as the Audi Q7 to look at, the Q5 goes without a third row of seats but still packs enough practicality to compete with large SUV rivals. That's important when those are as diverse as the BMW X3, Mercedes GLC, Volvo XC60 and Land Rover Discovery Sport. And while it’s far less expensive than its bigger sibling, the Q5 also needs to prove its worth over less expensive models, such as the Kia Sorento, Peugeot 5008 and Skoda Kodiaq.

Q5 buyers can choose from petrol, diesel or hybrid power, and Audi’s quattro four-wheel drive system is standard across the range. With four trim levels, there's no shortage of choice, while a long options list provides scope to tailor your Q5 to your tastes. Sure, it doesn’t offer the option of seven seats, but there’s enough space for a family of five and their luggage, and a sliding, reclining rear bench is available for added versatility.

Read on over the next few pages and we’ll give you the full lowdown on how the Q5 compares with its key rivals.  We’ll also tell you about its practicality, running costs and which trim levels make the most sense.

And if you're thinking of buying a Q5, or any other car, make sure you check out our New Car Buying section before parting with any cash. You might be surprised by how much you can save. 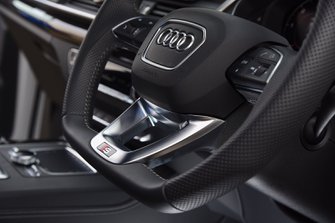 The seven-seat version makes a fine alternative to an MPV

There are plenty of more practical SUVs, but few are as enjoya...