How good is your memory, specifically on the subject of classic French sports cars? Well, if there’s a hint of petrol in your veins, you might recall the original Alpine A110. This tiny, rear-engined coupé may not have been particularly powerful, but its low weight and nimble handling helped it snatch the first ever World Rally Championship back in 1973.

Alpine (pronounced 'Al-peen') cars ceased production back in 1995 due to falling sales, but in 2017 parent company Renault decided to bring back the brand with a modern interpretation of the A110. Like its namesake, this is a small, lightweight sports car, albeit with the engine now sitting in the middle of the car. It still drives the rear-wheels, though, and the focus is still very much on pure driver enjoyment, rather than out-and-out lap times.

For those that want something a little more focused, meanwhile, there's the A110S,  which has lower, stiffer suspension and a bit more power, to help it bridge the performance gap to some of its quicker rivals.

And what are those rivals? Well, small and lightweight doesn’t mean cheap in the case of the A110. It’s priced to compete with some pretty serious machines, such as the Porsche Cayman and 2.0-litre Jaguar F-Type, as well as another sports car returnee, the Toyota Supra.

To find out if it's worth the cash, read on for our detailed impressions of the A110. And, when temptation has got the better of you, head over to our New Car Buying page to put one on your driveway without any hassle. 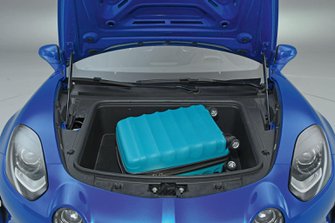 It might have been benchmarked against the Porsche 718 Cayman...