What Car? StaffLearn how we test cars

Like an automotive Frankenstein, Toyota seems fixated on bringing back cars from the dead. Indeed the Toyota GR Supra is the third car in the current lineup who’s name has been lifted from the bin, dusted off and glued to the back of a brand new model.

Like every generation before it, the A90 Supra (to use Toyota’s internal naming code) follows a simple recipe. Up front there’s a brawny straight-six engine that powers the rear wheels alone, although for the first time it’s a strict two seater. No manual gearbox is available, just an eight-speed automatic with standard paddle shifters should you want a bit more driver involvement.

But because profit margins on sports cars are so thin, Toyota has shared the development costs of the Supra with BMW. Cast your eye over the spec sheet for the Z4 M40i and you’ll notice that it shares its 3.0-litre turbocharged straight six, gearbox, differential and basic suspension setup.

Cast an eye over the interior and it’s even more obvious, with a lightly disguised iDrive infotainment system and lots of BMW switches, stalks and other controls. But although purists may scoff at the Supra’s German DNA, Toyota has most definitely put its own distinctive stamp on the car with unique styling and bespoke tuning for the oily bits. That’s it’s a lot lighter and stiffer than the soft-top only Z4 doesn’t hurt, either.

Although, with 335bhp, the Supra can charge from 0-62mph in a scant 4.3sec, it’s not outright performance that was the goal. Like the Alpine A110, the Supra has been designed to be fun above all else, even if it goes about it in a completely different way. Although it isn’t the porkiest sports car around, the Supra is still around 400kg bulkier than the A110. But the key rival Toyota has in mind is the Porsche 718 Cayman, while we’d argue the Jaguar F-Type V6 S offers something quite similar to the Supra.

Whatever it is you plan on buying, remember you can avoid tiresome haggling and get healthy discounts by using our New Car Buying service. Go on, you know you want to. 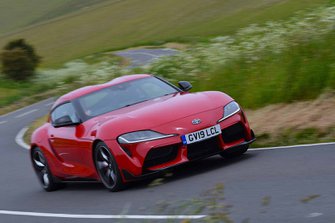 As for the coupé version, but with added sun; tiny boot

The M4 is every bit as visceral to drive as the M3, but lacks...