The Seat Leon SC. What is it exactly? Seat refers to it as a ‘sleek’ coupé, but rather than being a stand-alone model in the manner of an Audi TT Coupé, in the looks department the Leon SC is more in tune with the regular Leon five-door.

However, while it’s probably simpler to think of it along the lines of a three-door version of the Leon 5DR and Leon ST, that doesn’t stop plenty of people agreeing it’s a pretty thing. And you’ll fit more in it than you would many typical coupé models, thanks to a standard set of rear seats and good-sized boot.

In current form the Leon SC has been around since 2012, but along with the rest of the Leon range it has been updated since, with new infotainment systems and engines.

What’s the Seat Leon SC like to drive, and how does it compare to hatchback rivals such as the Renault Megane, Ford Focus and Volkswagen Golf? Read on and we’ll tell you all you need to know, including which engine and trim combinations are the best. 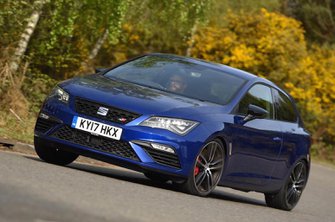 Well equipped and spacious. Rivals are better to drive and cla...

Good value but falls behind the class leaders