The design team must have been nervous when it was announced that the Peugeot 2008 (and its smaller 208 stablemate) would be released with a fully electric option alongside the traditional petrol and diesel variants – surely the buying public would expect a suitably outlandish design to match the innovative technology under the surface? People want their electric cars to stand out, right?

Well, Peugeot doesn’t believe that’s the case, and nor do several other manufacturers. In fact, it’s become the trend for electric versions of fossil fuel-powered cars to blend in amongst their conventional stablemates, helping electric car buyers to feel less self-conscious while doing their bit to conserve valuable natural resources.

The brand's decision gave its design team an easy life; with the petrol and diesel-powered 2008 already a fairly neat looking thing, all it took was the addition of a few ‘e’ badges and a slight change to the front grille (with horizontal lines instead of vertical ones) and their work on the electric version was done. So if you like the look of the 2008, you’ll find the e-2008 similarly appealing inside and out.

But is there more to admire than its striking French looks? That’s an important question given that there’s plenty of electric car competition. Its rivals, the Kia e-Niro and Hyundai Kona Electric rule the roost in this territory, with the impressive Kia Soul EV, and great value MG ZS EV putting up a strong challenge, too.

On paper at least, the e-2008 looks convincing. It gets an interior that offers style and space, a 50kWh battery that gives it an official range of 206 miles, as well as all the other low-running cost benefits of EV ownership. If all this has already piqued your interest and you fancy picking up a new electric SUV with absolutely no hassle, be sure to head straight for our New Car Buying service. 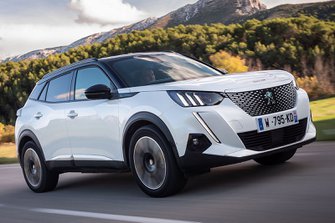