The BMW 330e is a new plug-in hybrid version of the excellent 3 Series saloon. We've tested it on UK roads for the first time... 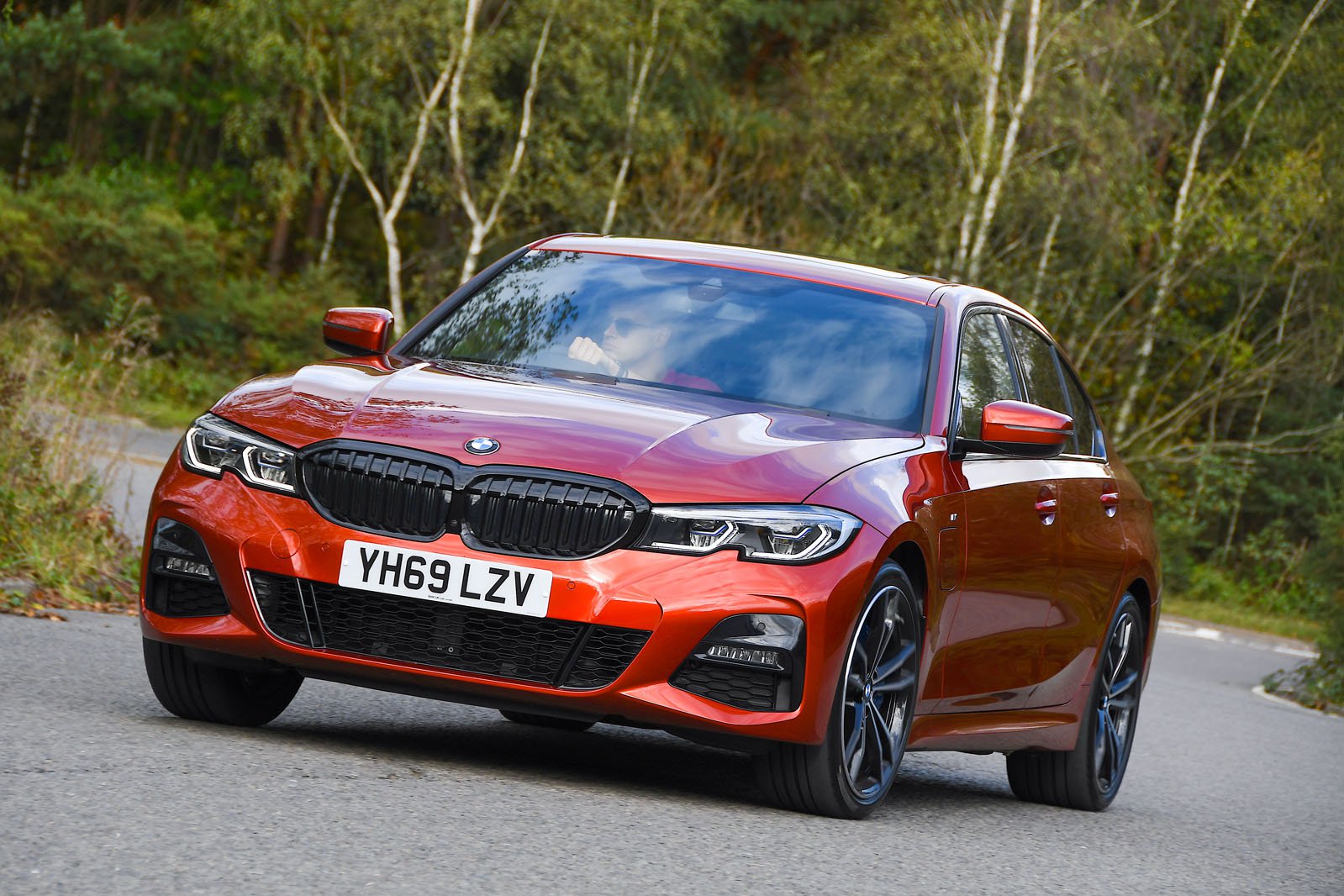 Fusion food. We've all heard of it, but what exactly is it? Well, it’s combining different culinary traditions in seemingly unusual ways – and when done skilfully, the results can be spectacular. Ever tried a Kenyan Scotch egg? You really should.

You can think of the new BMW 330e as a fusion car. It combines BMW's long-standing tradition of making sharp-driving petrol saloons with the latest plug-in hybrid technology. From mid-2020, you’ll be able to get a Touring (estate) version should you need a bigger boot, but for now, the 330e is available only as a saloon.

But let's start by decoding the name, because the '3' at the start is there to denote that this is a version of BMW's Mercedes-Benz C-Class and Audi A4 rival, the 3 Series. The '30' that follows is because the car pumps out similar power to the pure petrol 330i and diesel 330d, although here it does so thanks to assistance from an electric motor, hence the ‘e’.

Compared to the previous-generation 330e, this new model has almost double the electric-only driving range and CO2 emissions as low as 37g/km, which means really low BIK tax rates for company car drivers. It’s hardly surprising, then, that BMW reckons as many as one in every four 3 Series sold will be a 330e. 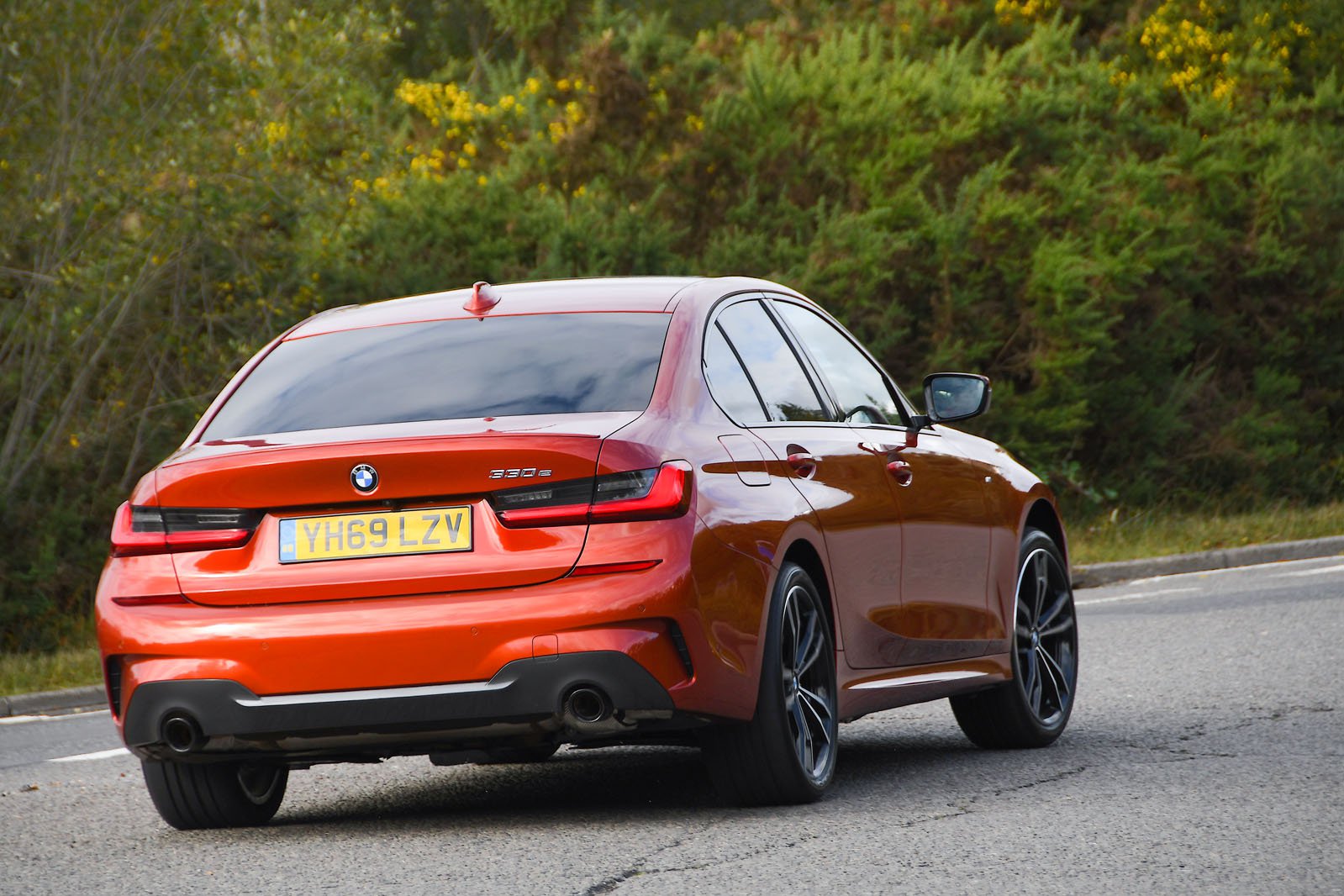 Let's start by recapping on what a plug-in hybrid actually is.

Just like a fully electric car, but unlike a so-called ‘self-charging’ hybrid, a plug-in can manage reasonable distances on battery power alone. But if you need to make a longer journey, or simply didn’t have a chance to charge up the battery, there’s a good-old-fashioned petrol engine to help out.

Indeed, in our tests, the 330e managed 26.5 miles, which is plenty to handle short commutes and farther than the 24.8 miles posted by the rival Volvo S60 T8.

To make sure the petrol engine stays switched off, you need to put the 330e in its pure electric driving mode and avoid using the lower reaches of the accelerator pedal. However, even when using the regular driving modes, the 330e will power itself along using mostly its electric motor so long as there's charge in the battery and you're driving gently.

Once the battery is out of juice, the 2.0-litre, four-cylinder petrol engine is forced into getting its hands dirty. Don’t expect spectacular fuel economy at this point, because the 330e is around 200kg heavier than a regular petrol 3 Series (blame the battery and electric motor), but it still managed a respectable 37.2mpg in our tests on a mix of roads.

Performance is adequate even when you're driving on pure battery power, but floor the accelerator pedal and the petrol engine gets in on the action. With both power sources working together, the 330e can pump out a hefty 288bhp. In our tests in damp conditions, 0-60mph took a very respectable 6.2sec – although the pricier S60 T8 is noticeably quicker still.

Given how much heavier the 330e is than a regular petrol or diesel 3 Series, the fact that it isn't quite as agile comes as no surprise. However, it's still heaps more fun than the S60 T8, leaning less through tight twists and turns and feeling altogether better balanced. The precise, well-weighted steering gives you a good sense of how much grip there is, too.

Our test car was an M Sport model fitted with BMW's optional M Sport Plus Package. This £2200 option increases the size of the alloy wheels to 19in (from 18in) and brings adaptive suspension, allowing you to stiffen a soften the ride at the touch of a button.

Even if you choose the most comfortable suspension mode, there's no doubt the 330e is firmer than an S60 T8; you feel yourself following the contours of the road more rigidly. Mind you, while the S60 tends to crash and shudder when it encounters a sharp-edged bump or pothole, the 330e always maintains its composure and deals with such obstacles quicker and more effectively.

There's a noticeable amount of road noise at 70mph, so the 330e isn't the quietest cruiser, but it's far from a rowdy companion on motorway jaunts. 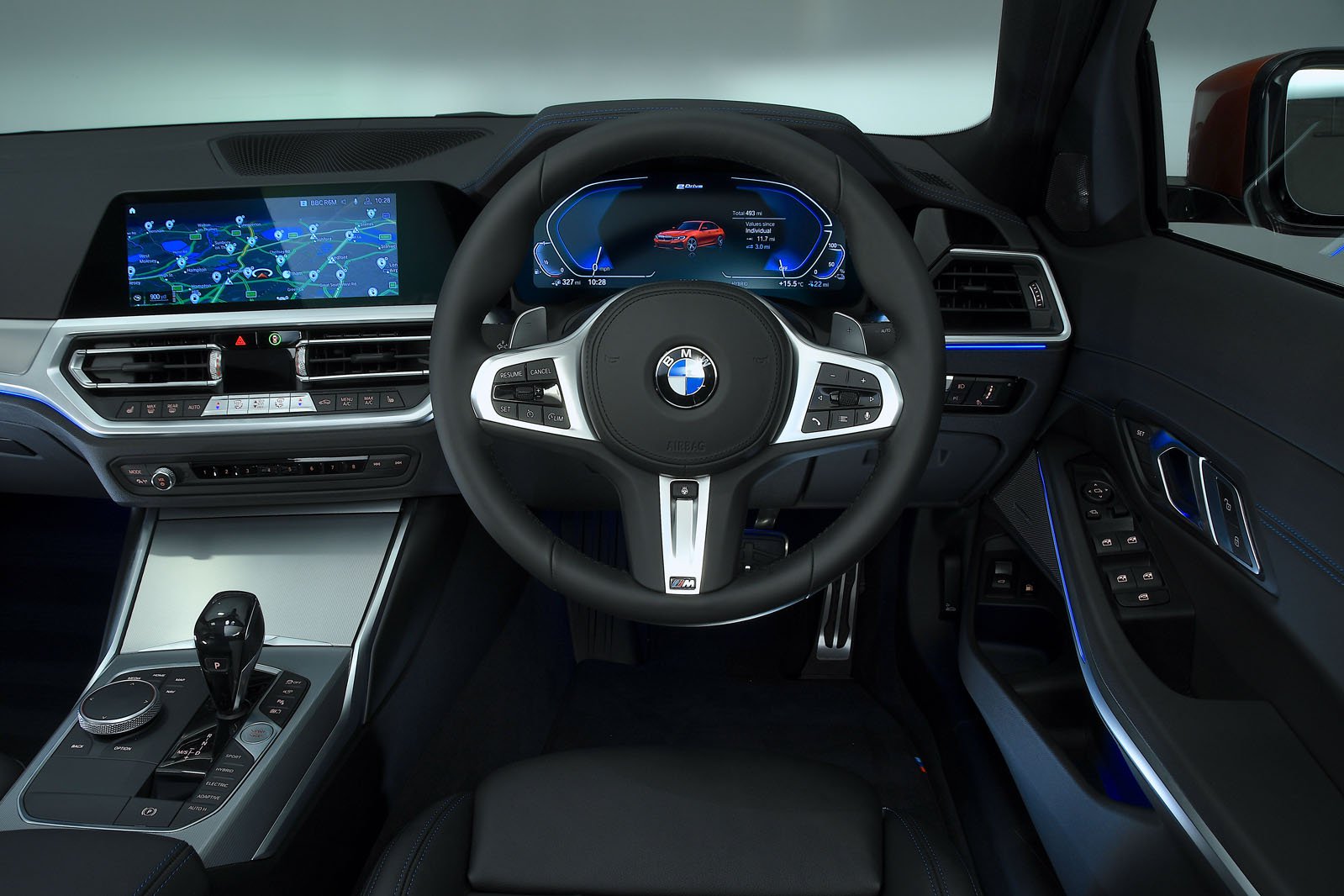 While the 330e looks pretty much identical inside to most other versions of the 3 Series at a glance, there are some details that are easy to miss. For example, you get handy readouts on the digital dials behind the steering wheel that are unique to this plug-in hybrid model.

These show you how much charge you have in the battery, and there's also a readout that tells you how far down you can press the accelerator before the petrol engine kicks in. You'll also notice a few different buttons on the centre console for the various driving modes.

You can get the 330e in any of the three trim levels available for the regular 3 Series (SE, Sport and M Sport). However, unlike the regular petrol and diesel models, the 330e has a function that allows you to preset the interior temperature for a specific departure time. This is done using the BMW smartphone app, so you can get into a warm or cool car whatever the weather.

If you’re wondering how the engineers have managed to squeeze a big battery into the 3 Series' already fairly compact dimensions, well here’s your answer: by stealing space from the boot. Yep, the 330e has about 100 litre less space for luggage than its regular petrol and diesel counterparts.

The space that’s left is really shallow, so we managed to squeeze in just five carry-on suitcases (compared with seven in the regular 3 Series). The S60 T8, also a plug-in hybrid saloon, has a much bigger boot. On the plus side, the 330e does get split folding rear seats as standard for those occasions when you need to carry longer loads.

In other respects, the 330e is just like any other 3 Series inside, so for more information head over to our detailed 16-point review.