The problem with electric cars, particularly of the SUV variety, is that, while they're cheap to run, they can be rather expensive to buy in the first place. There is one notable exception, though – the MG ZS EV.

Ever since MG was relaunched by a Chinese company in 2011, the once-famous British sports car brand has concentrated on building value-focused models, with steadily increasing success. The Nissan Qashqai-sized ZS, launched in 2017, is its most rounded model yet, so it’s hardly surprising that it was chosen as a basis for MG’s first electric vehicle (EV).

Of course, the electric ZS isn’t quite the bargain-basement offering its petrol-powered sister is; it costs roughly the same as similar-sized petrol or diesel-powered SUVs. That’s still way below what you’d pay for equivalent electric SUVs, such as the Hyundai Kona Electric and Kia e-Niro, though. In fact, it even undercuts smaller EVs, like the Renault Zoe and Nissan Leaf.

Value for money, then, looks like a ZS EV strength. But is it a genuine bargain, or simply proof of the old adage that in life, you get what you pay for? That’s what we’ll look to uncover as you click through this review. We’ll go into much more detail about the MG ZS EV’s costs, and also what it’s like to drive and how practical it is.

Don’t forget to head over to our New Car Buying pages afterwards to check out exactly how much we can save you on most new cars on sale. The best bit is that the whole process is quick and easy. 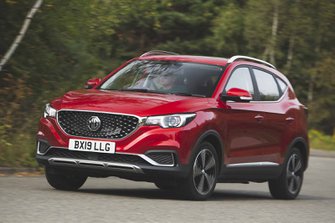