Most will be perfectly happy with the diesel-powered A180d; it earns our recommendation with a progressive power delivery, rather than it all coming in one big surge like it does in some rivals. It’s not spectacularly quick, but performance is on par with the equivalent Audi A3 Saloon 1.6 TDI. Larger 2.0-litre diesels are available, but we’re yet to sample them.

If you can afford it, the A250 is the best petrol model aside from the AMG 35. It uses a 2.0-litre petrol engine that packs an impressive 221bhp. This makes it a close match for the Volkswagen Golf GTI in a sprint, and it still feels pleasingly brisk when you’re not thrashing it, thanks to plenty of urge at low revs. The 187bhp version in the A220 isn’t quite as punchy but still proves powerful enough for brisk progress. Plus, it’s the only engine available with four-wheel-drive.

The 1.3-litre A180 and A200 models are the other two petrol options. We’d avoid the A180, because it needs to be worked quite hard to keep up with traffic. The A200 is just about punchy enough but isn’t enthusiastic to be revved hard, and that might stifle your enjoyment.

Read our separate review for insights into the performance of the seriously quick AMG A35.

The previous-generation A Class wasn’t exactly famous for its smooth ride, but this latest model is a lot more relaxing, especially in saloon form. The suspension of the booted A Class is noticeably softer than the hatchback’s, giving a relaxed motorway ride. It’s good on undulating roads, too, although patchy asphalt and potholes generate the odd thud. Compared with the Audi A3 Saloon, though, the A Class Saloon certainly seems at least as comfortable even on large wheels. Of course, if you're looking at the executive car class, it's worth noting that an Audi A4 Saloon on small wheels and non-sport suspension is more comfortable still.

Of course, resisting the temptation to fit big wheels to your A Class Saloon is advisable if ride comfort is a priority. However, the relatively sporty A220 and A250 are no less comfortable than the cheapest models in the range, due to their use of a more sophisticated rear suspension setup. 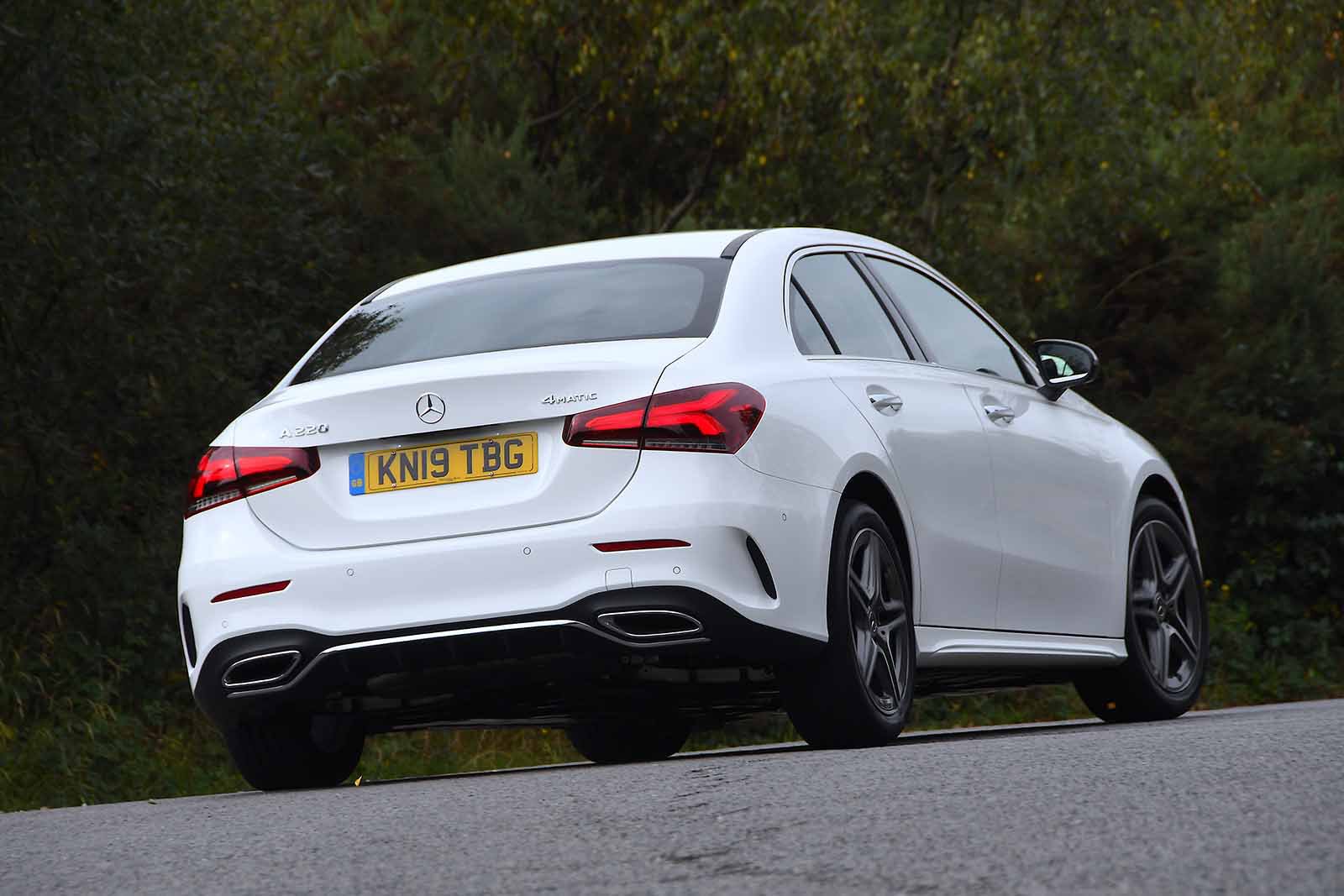 The A Class Saloon handles pretty well. Yes, there’s a bit of body lean through faster corners (definitely more than the hatchback), but this happens so progressively that things never feel unstable during quick changes of direction. The steering also impresses; it builds weight in a natural way as you turn in to corners, and the fact that it’s always accurate allows you to place the car just where you want it. It’s also light enough to ensure that town driving isn't a chore.

It runs out of front-end grip quicker and rolls more than the sharper-handling Audi A3 Saloon and Mercedes’ own sportier CLA, but we'd happily recommend most A Class models to keen drivers. However, if you don't mind spending a bit more, the BMW 3 Series remains the driver's choice in the executive car class.

Refinement isn’t the A Class Saloon’s strongest suit if you choose the A180 or A200. Their 1.3-litre turbo petrol engines are rather boomy and generally a bit uncouth, especially when you work them hard.

The more powerful A220 and A250 petrols come across as rather more cultured, combining smoothness at low speeds with a fairly sporty rasp if you work them hard. The AMG A35 , meanwhile, sounds racier still. By contrast, the diesel engine in the A180d is smooth and quiet by the standards of the class; it's at its smoothest at low-to-medium revs but sounds a little strained higher up.

The six-speed manual gearbox that's standard on only the A200 is a little notchy. The automatic gearbox, meanwhile, selects its gears wisely and promptly most of the time, and is smooth in its shifts.

Fortunately, helped by the car’s superb aerodynamics, wind noise is very well suppressed, and you’re not plagued by a constant whistling and fluttering at motorway speeds around the windows. Just remember that a panoramic roof does generate more wind noise than the regular steel item. And while there’s a noticeable amount of road noise at speed, it's no more intrusive than in an equivalent Audi A3 Saloon. It's most noticeable on models with 18in alloy wheels, but you'll still experience some background drone on cars with a 17in set. Of course, if you want the best possible refinement, it's the Audi A4 that should be top of your list.

Comfortable, composed and well equipped, but some rivals are m...

The Honda Civic Saloon is good to drive, has a big boot and co...