Given that Kia already sells a big saloon in the UK – the Optima – you might wonder why it needs another executive model.

The Kia Stinger isn’t just another mainstream executive car aimed at the likes of the Ford Mondeo and Vauxhall Insignia Grand Sport. No siree; it’s a svelte assault on a prestige five-door coupé market that's dominated by the likes of the Audi A5 Sportback and BMW 4 Series Gran Coupé, with the Volkswagen Arteon thrown in for good measure.

Whether that sounds like an ambitious idea or a downright daft one will depend largely on your perception of the Kia brand. If you’re in the latter camp, it’s worth remembering that, worldwide, this Korean firm sells several times more cars than Alfa Romeo, Jaguar and Land Rover combined, and has won more design awards over the past decade than you can shake a clay modelling scalpel at.

Under its sleek, five-door coupé body, the Stinger is based on the same mechanical package as sister brand Genesis’ G80 and both are rear-wheel drive. But, with a trio of engines to pick from that include a diesel and a twin-turbo V6 petrol, can the Stinger compete with its premium-branded rivals?

Read on to find out and when you're ready to buy, head to our New Car Buying page to find the best new cars discounts going. 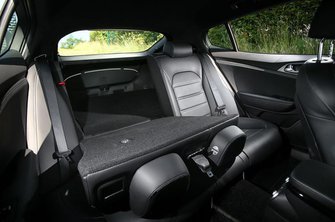 The S90 is a fine executive saloon, and if you’re in the marke...

Great to sit in and impressive on the safety front...