Heritage is a double-edged sword. While the Jaguar F-Type Coupé can be rightly proud of its lineage, to live up to the prestige of its illustrious predecessors is no easy feat.

That’s especially the case when its very name is just one letter removed from the legendary Jaguar E-Type of the 1960s, and that car didn’t have anything like as many rivals as its 21st century descendent. The entry-level F-Type competes with the Porsche 718 Cayman and Audi TT RS, while the top F-Type SVR encroaches into territory occupied by the McLaren 540C.

To see off this veritable battalion of adversaries, the F-Type is pretty much a one-car army. Engines range from a 296bhp 2.0-litre four-cylinder to a 567bhp, 5.0-litre supercharged V8 that emits a blood-curdling battle-cry when provoked. In short, the F-Type spans the gulf between sports car and supercar, ably assisted by its soft-top sister, the F-Type Convertible.

To help it on this demanding mission, Jaguar has kept the F-Type up to date – a 2017 refresh brought more sophisticated infotainment technology, LED headlights and interior tweaks. It’s still a strict two-seater, though – you’ll need an Audi TT RS or Porsche 911 to match the F-Type’s performance while carrying more than one passenger.

There’s clearly a lot to say about the F-Type, so read on and we’ll tell you exactly how it drives, what it’s like for passengers and how much it’ll cost you to run. We’ll also explain which engines are our favourite, and why.

Already imagining a F-Type on your drive? The next step is to visit our New Car Buying pages to find out just how much you could save, without any tedious haggling. 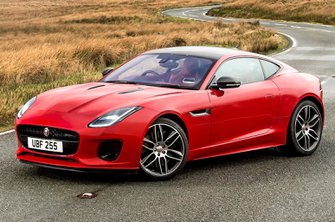 Not the keenest-handling SUV, but the GLC Coupé offers decent...

Exciting to drive and looks great, but not as polished as riva...