However long civilization lasts, it’s probably fair to say that Pablo Picasso’s artistic legacy will last longer than that of the Citroën C4 Picasso.

That’s not a slight against Citroën’s stoic MPV, but rather a reflection on the significance of Picasso’s work and the comparatively short time his name was tagged onto Citroën’s people-carriers.

Because now Citroën has, like a fickle modern art dealer, tossed his name aside in favour of a new one. It has newly christened the C4 Picasso as the C4 Spacetourer, bringing it in line with the French manufacturer’s biggest MPV, the nine-seat Spacetourer, while there’s also a seven-seat C4 Grand Spacetourer.

But we’re focusing on the five-seat version in this review. It promises to be one of the most practical cars of its type, with a roomy interior and a decent-sized boot. However, there’s plenty of five-seat MPV competition, including the BMW 2 Series Active Tourer, Renault Scenic and Volkswagen Golf SV.

Read on over the next few pages to get our in-depth impressions of the C4 Spacetourer, along with our recommendations for which trim levels and engines to choose. And if you want to buy one, visit our New Car Buying service to see how much you can save. 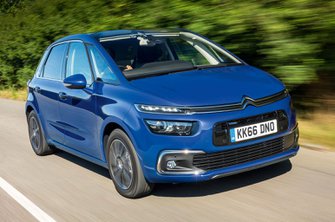 The Volkswagen Golf SV is a good MPV, but it’s hard to forget...