With its butterfly doors and bold, sculpted body, there’s no doubt that the BMW i8 turns heads on the high street. There’s more to it than merely eye-catching looks, though – the i8 may just be the most ambitious car that BMW has ever produced.

Although it falls into the same sports car bracket as the Porsche 911 and Audi R8, the i8 does things rather differently by using plug-in hybrid technology. Its three-cylinder petrol engine – related to that used in the Mini hatchback – is far smaller than those of its rivals, but it combines with electric power to provide impressive performance. This is a car that’s designed to be as exciting to drive as it is kind to the environment.

You can choose the i8 as a coupé, or as the open-top i8 Roadster, which we’ve reviewed separately. Although both versions share their two-seat, mid-engined layout with the R8, other similarities are few and far between. A large portion of the i8 is made from strong, light carbonfibre – a material that’s also very stiff, which is good news for both handling and crash safety. And, while the i8 isn’t alone in being a hybrid sports car, the Honda NSX goes without plug-in technology, while the Porsche 918 Spider and McLaren P1 supercars cost several times as much.

In fact, plug-in power is key to the i8’s appeal. Its electric motors complement the petrol engine to provide considerable punch, and its battery pack allows you to cruise silently on all-electric power for up to 34 miles. It also helps the i8 towards remarkable official fuel economy figures, and far smaller company car tax bills than most other sports cars will bring.

Read on over the next few pages for our detailed impressions of the i8 and, if this high-tech sports car captures your imagination enough to take the plunge, visit our New Car Buying site to see how much you could save. 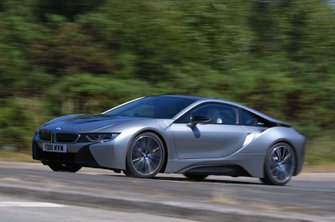